A Paradigm Shift for the Motor Cortex?

Many people will be familiar with this rather strange image: 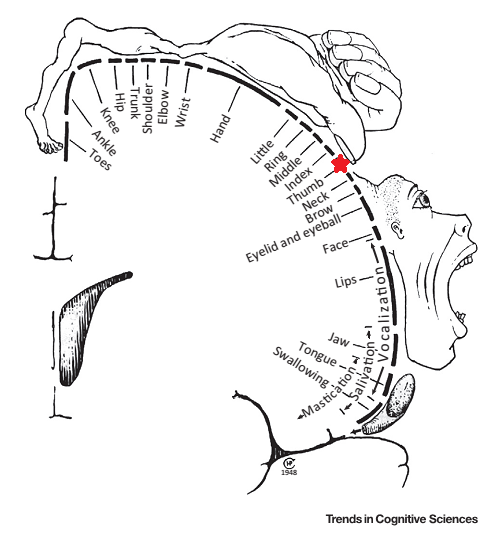 It's a depiction of the motor homunculus, which is essentially a "map" of the body located in the brain. The image shows how different spots of the primary motor cortex control different parts of the body. So, for instance, the spot I've highlighted in red corresponds to the muscles in the thumb. If you were to stimulate this spot, say using an electrode, it would cause the thumb to twitch. By stimulating different points and seeing what happened, the neurosurgeon Wilder Penfield first mapped the motor homunculus in 1937 and this account has become the orthodox view of how the motor cortex is organized. But now, some neuroscientists argue that Penfield got it wrong. Michael S. A. Graziano of Princeton was the first to propose the new model, and he reviewed the evidence for it in

a new paper in Trends in Cognitive Sciences

. He's not shy about explaining the importance of his theory: in the title of the paper he calls it "A Paradigm Shift for the Motor Cortex." According to the alternative view, the primary motor cortex doesn't contain a neatly layed-out map of the body, and the different points don't correspond to different muscles. Rather, the claim is that the cortex contains an 'ethological action map' - i.e. different areas encode different actions. An action, in this sense, is a whole series of muscles acting in sequence, leading to a coordinated movement such as "raise hand to face". Actions are far more complex than the single muscle contractions that the motor cortex encodes according to the orthodox view. Here's what an action map looks like, according to Graziano: 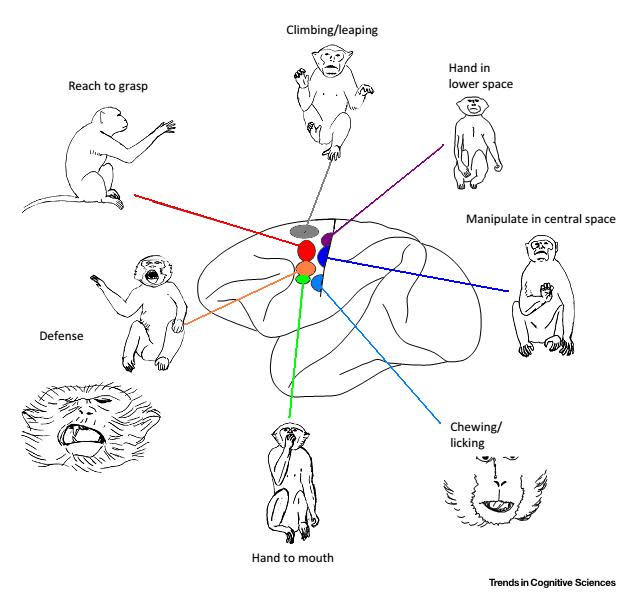 The colored spots on the brain are points on the motor cortex of a monkey. , Graziano says that stimulation of the different points evokes "complex actions that appear to come straight from the animal's normal repertoire", such as "reach to grasp", "defense", and "climbing/leaping" On the other hand, Graziano adds that Penfield was partly right: there is a map of the body in the motor cortex, but it is distorted and fragmented because it has to share the space with the action map. If that's the case, how did no-one notice this before? Why was the action map only discovered in 2002 by Graziano's team? The trick, Graziano says, is that in order to evoke complex actions, you have to apply a prolonged electrical stimulation to the same spot - from 500 ms up to 1 second. Previous researchers, including Penfield, used very brief stimulation pulses, of perhaps 50 ms. Graziano says that these brief pulses only cause twitches (the beginnings of actions, perhaps?) and that the action map can only be uncovered with longer pulse trains. Not everyone is convinced by the action map model however, and the long pulse trains are the main bone of contention. Skeptics, such as Paul D. Cheney, argue that prolonged stimulation causes activation to "leak" and spread over a wide area, triggering multiple muscles to move. Thus, the stimulation creates an artificial "action circuit", rather than activating one that normally exists in the brain. Cheney calls this the "neural hijacking" hypothesis. Graziano disagrees, saying that there's a host of convergent evidence that confirms the theory, including data from experiments using "optogenetic stimulation, chemical stimulation, chemical inhibition, surgical lesions and cortical reorganization during recovery" as well as "the specific match between stimulation-evoked actions and neuronal response properties, the specific match between stimulation-evoked and natural behaviors".