The chip responds to electrical activity just like real neurons do. 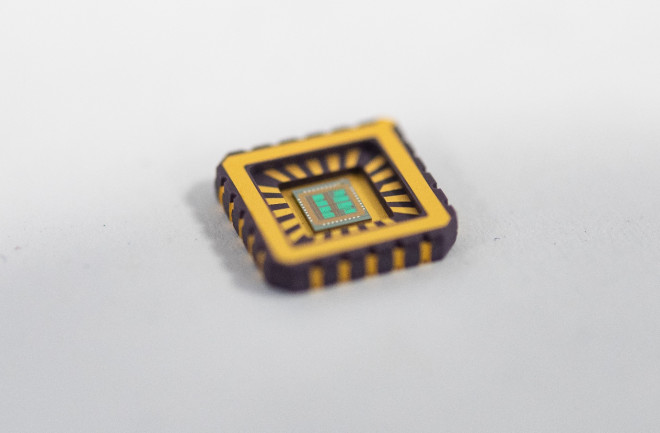 Scientists created a silicon chip that reproduces the electrical activity of neurons. (Credit: University of Bath)

Step aside, Six Million Dollar Man. Since the first artificial pacemaker was implanted half a century ago, and arguably before, humans have worked to create technology that can repair and replace our own body parts. In some cases, these devices work by mimicking human biology.

Now, scientists have managed to reproduce a particularly enigmatic biological process: the electrical activity of neurons, which include brain cells. Neurons send information throughout the body in the form of electrical signals.

In a study published today in Nature Communications, a team led by scientists from the University of Bath in the U.K. describes a method of making silicon chips that they say can function like real neurons. The researchers say that the technique could one day be used to repair parts of the nervous system that are damaged by disease.

From Biological to Bionic

The idea of building artificial neurons, synapses and entire brain networks isn’t exactly new. In 1991, for example, scientists created a silicon chip modeled after real nerve cells. But researchers have largely used biological processes as an inspiration for these devices, rather than attempting to faithfully replicate the behavior of individual brain cells.

Increasingly, though, scientists are turning to bioelectronic devices: tech like microcircuits, electrodes and sensors that can be implanted in the body as a way to potentially treat chronic diseases.

The study authors say this shift necessitates technology that can transmit information between a biological cell and a bioelectronic circuit. Then, microcircuits and other devices will be able to process “raw” stimuli going to and from the nervous system. Ideally, these devices would interface with a patient's nervous system — much like a normal neuron.

To do that, the researchers needed to design a chip that responds to electrical signals in the same way as actual brain cells.

The researchers hope that the new method of creating artificial neurons can one day allow them to implant the device in people, where it would interface with other brain cells. (Credit: University of Bath)

In their study, the researchers set out to design a microcircuit modeled after ion channels — proteins that act like a gate, allowing electrically charged molecules to pass through cell walls. They also drew from a large dataset of recordings of the electrical activity of brain cells.

Next, the scientists were able to create silicon chips that replicated the behavior of individual neurons from the hippocampus, which plays a key role in learning and memory, and the respiratory system. After running 60 different types of electrical stimulation through the chips, they found that the synthetic neurons had almost identical electrical responses as biological brain cells.

In the paper, the researchers describe how the device might offer new possibilities in disease treatment. They note that respiratory neurons are responsible for regulating rhythms that influence certain breathing and heart functions. When these rhythms degrade, often a result of age or disease, it can lead to conditions like sleep apnea and even heart failure.

An artificial neuron, or group of neurons, stepping in to pick up the slack for aging brain cells might one day offer a potential therapy for these and other conditions, the authors suggest.