A New Map of the Brain: What Does It Mean?

has earned a lot of media attention, unusually given that it's a fairly technical and 'basic' piece of neuroscience. In the paper, researchers Matthew F. Glasser and colleagues present a new parcellation (or map) of the human cerebral cortex, breaking the cortex down into 180 areas per hemisphere - many more than conventional maps. But is this, as Nature dubbed it, "the ultimate brain map"? To generate their map, Glasser et al. first downloaded 210 people's data from the Human Connectome Project (HCP), including structural MRI, several task-based fMRI sessions, and resting-state fMRI. Then, they averaged the brains and calculated the spatial derivative (gradient) of various metrics across the cerebral cortex. So for instance, one of the structural metrics was myelin content; the myelin gradient shows areas where myelin content differs between neighboring regions. 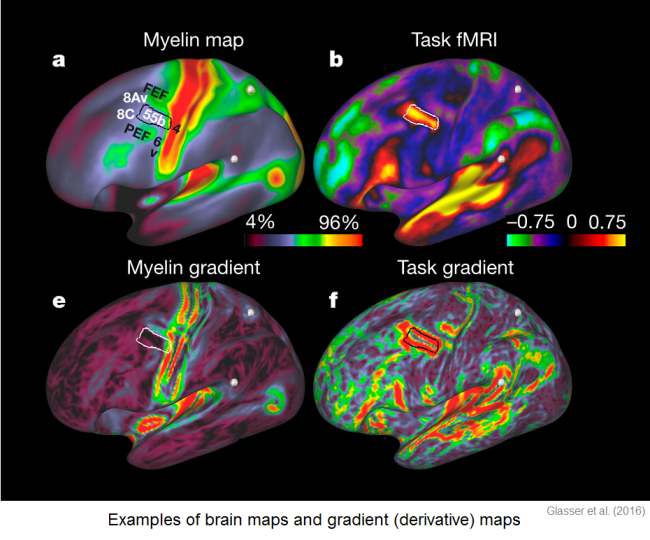 Glasser et al. looked for areas where two or more metrics both showed high gradients ("ridges") in the same place, and then used a semi-automated process (involving some manual input) to designate these ridges as region boundaries, and partition the cortex accordingly. The result is a patchwork quilt of 180 different cortical areas, here shown color-coded according to their broad functional specialization: 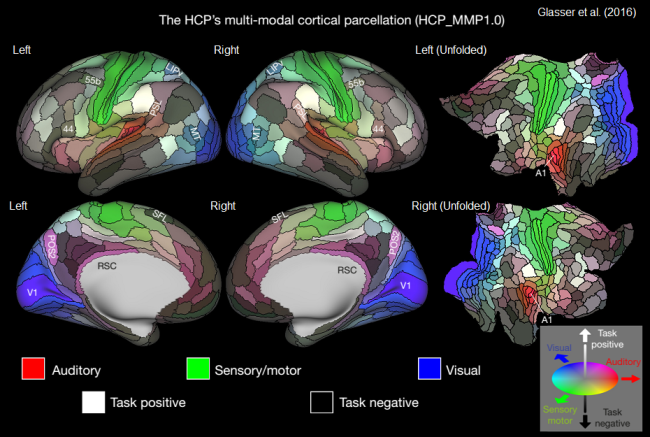 Moreover, Glasser et al. developed an automated tool - an 'areal classifier' - to allow the parcellation of any individual brain according into these 180 regions, which could be a boon to e.g. fMRI analysis. The authors say that the areal classifier will be freely released soon; however, it seems to require that the data includes a series of structural and fMRI scans similar to those found in the HCP, which might limit its usage. This is a really cool piece of work. However, it's unlikely to be the definitive map of the cortex (and the authors don't claim that it will be.) Glasser et al. say that their map probably underestimates the true number of distinct cortical areas, and that future research might subdivide the cortex even further. Another issue is that Glasser et al. didn't include any diffusion-weighted imaging (DWI) data in their study. DWI is an MRI technique which reveals the locations and directions of white-matter pathways in the brain, the brain's "communication fibres". It will be interesting to see whether a DWI-based parcellation ends up matching with Glasser et al.'s or whether it reveals something different.