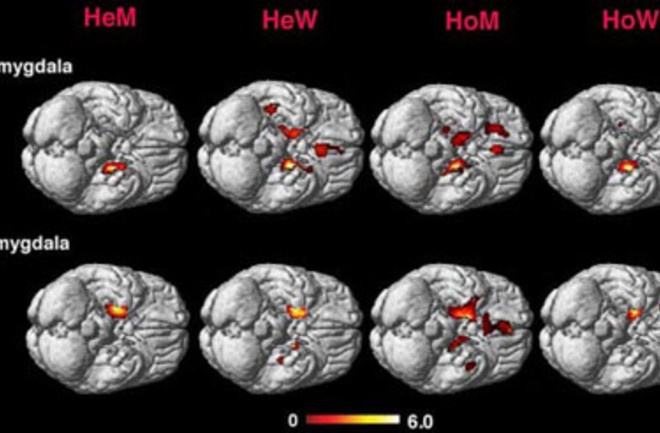 The debate over the roots of homosexuality is possibly the most contentious manifestation of the "nature versus nurture" argument; gay rights advocates, gay rights opponents, and scientists have all joined the fray, advancing and criticizing different theories. With a new brain imaging study, the "nature" proponents seem to have gained a point in their favor. Swedish researchers did MRI scans of 50 heterosexual men and women and 40 homosexual men and women and found surprising parallels. The brains of lesbians and straight men were anatomically symmetrical while the brains of gay men and straight women had a larger right brain hemisphere. The researchers also looked at the amygdala, a part of the brain that's associated with emotions, and found that straight women and gay men both have more connections between the amygdala and brain regions associated with anxiety and mood disorders. Meanwhile, the amygdala of lesbians and straight men had more connections to the region that controls fight or flight reactions. These clear differences suggest that sexual orientation is determined by biology, not by social factors. The differences are likely to have been forged in the womb or in early infancy, says Ivanka Savic, who conducted the study at the Karolinska Institute in Stockholm, Sweden. "This is the most robust measure so far of cerebral differences between homosexual and heterosexual subjects," she says.Previous studies have also shown differences in brain architecture and activity between gay and straight people, but most relied on people's responses to sexuality driven cues that could have been learned, such as rating the attractiveness of male or female faces

[New Scientist]. In contrast, this new study looked at brain parameters like brain size that aren't altered by learning.

The findings, which will be published in the Proceedings of the National Academy of Sciences [subscription required] tomorrow, didn't go so far as to suggest a cause for the brain differences between gay and straight folks. The researchers added that the study cannot say whether the differences in brain shape are inherited or due to exposure to hormones such as testosterone in the womb and if they are responsible for sexual orientation. But this is something they plan to look at in a further study of newborn babies to see if it can help predict future sexual orientation

Image: Proceedings of the National Academy of Sciences