A Career In Ink 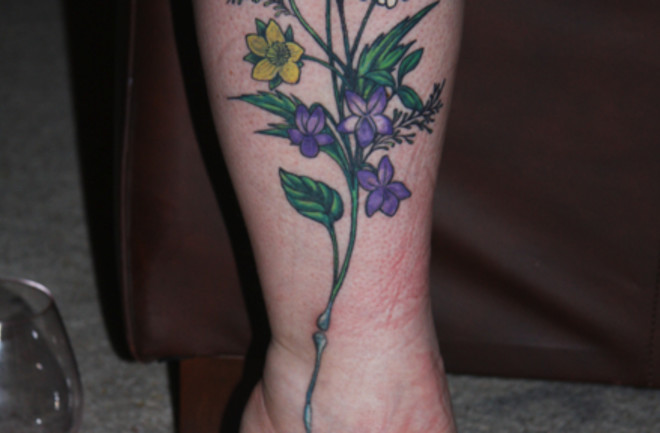 Julia writes, "6 years ago I decided to change my life and go back to uni to study medicine.  I decided that if I got through I was going to get a tattoo to celebrate – I wanted a tattoo that said something about me – about where I'd come from.  It took a long time to come up with the idea, but I came up with this – the neurone represents my medical degree, which synapses with my first academic passion - the biogeography of plants (so maybe I'm a bit of a freak).  To tie these together further, I chose plants that have medical (or at least pseudo-medical) uses – the dog violets can supposedly improve renal function (I want to be a nephrologist – many people think that makes me even more of a freak), and chamomile is known to have a calming effect (I thought it might help with all those stressful on-calls!).  Frankly, I chose the herb bennet because I thought it looked pretty!  I'd originally planned on having the neurone the other (right) way round, but my fantastic tattoo artist, Charlotte (she owns Venus Fly Trap in Edinburgh), thought it would look more root-like this way round, so I sacrificed some scientific accuracy for the sake of aesthetics."