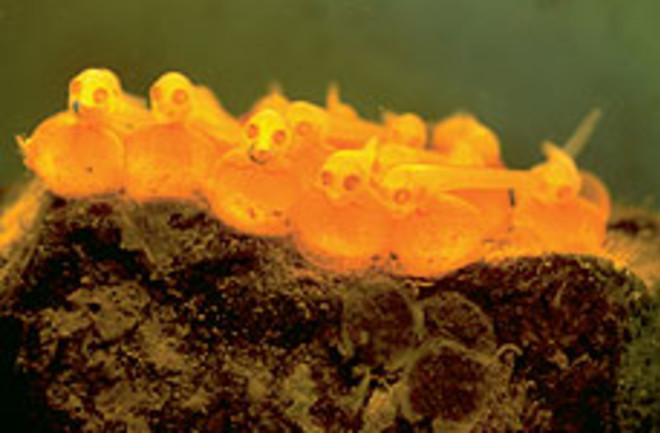 Every year in late spring and early summer, along coastlines from Alaska to the Gulf of Mexico, a fish called the plainfin midshipman uses its swim bladder to emit an odd droning sound in hopes of attracting a mate. The strategy works, animal  behaviorists at Cornell University reported in July, because of a previously unknown connection between hormones and hearing.

The Cornell team found that plainfin midshipman females experience a surge in their hormone levels a month before they respond to the male’s love call. To see if this change enhances their hearing, the researchers caught some females out of breeding season and replaced their ovaries with capsules of either testosterone or a form of estrogen. They then attached electrodes to the fish’s auditory nerves and placed them in a tank equipped with an underwater speaker. Within 30 days, the electrodes began to pick up impulses whenever sounds at high frequencies (to the fish) were played over the loudspeaker.

The Cornell team isn’t sure how the hormones work. “Are these changes occurring in the auditory nerve? Are they occurring in the hair cells that the nerves project to? Maybe you get changes in the brain,” says team member Joseph Sisneros, now at the University of Washington. Whatever the mechanism, it may also occur in humans. As we age, our hearing diminishes in tandem with our falling hormone levels. If the relationship is more than coincidental, Sisneros says, “there might be therapies down the road like taking hormones to maintain our hearing sensitivity.”