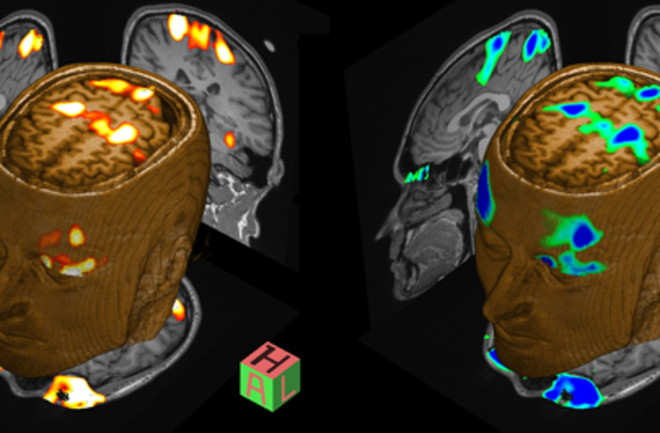 FMRI scans of the brain show a healthy volunteer answering "yes" to a researcher's question at left and "no" at right, using only the power of thought. | Martin M. Monti

A man believed to be in a vegetative state managed to answer doctors’ questions—using only his thoughts. The startling experiment, described in February in the New England Journal of Medicine, suggests a new way to measure consciousness in brain-injured patients.

Following a traffic accident, the patient had not spoken or made any other intelligible responses for five years before being included a study conducted by Adrian Owen and his team at the Medical Research Council Cognition and Brain Sciences Unit in Cambridge, England. The team tracked the patient’s brain activity using functional magnetic resonance imaging (FMRI) while posing simple questions, such as whether he had a brother. He was asked to imagine walking around his house to indicate yes, and to think about playing tennis to signal no. In a healthy brain, these responses are easy to tell apart on a scan: Tennis activates motor-related brain areas, while navigating activates spatial regions. Using this simple code, the patient answered five of six questions correctly.

Martin Monti, a neuroscientist and lead author of the study, was “blown away” by the data. “We now know this patient has much more cognitive function than we ever imagined,” he says. Monti looks toward the day when fmri can improve diagnosis in disorders of consciousness and search for signs that patients are actually cognizant and alert. In some cases, imaging might also be used to communicate, but Monti thinks this may be rare. Only 5 of 54 patients whom he has studied have been able to do the visualization task at all.