20 Things You Didn't Know About ... Violence

Are humans hardwired to be violent? Maybe. The answer — and the very definition of violence within andbetween species, including our own — is evolving. 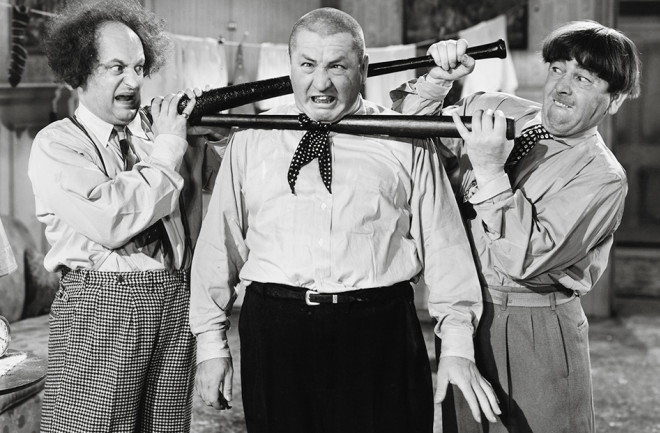 A 2009 study showed that violent imagery — whether it's played for laughs or not — does not inspire violent acts. (Credit: Everett Collection)

1. Defined as intentionally using physical force to harm, violence kills 1.5 million people globally each year, according to the World Health Organization. From war zones to crime-ridden neighborhoods, we live in violent times.

2. Or do we? The murder rate has plummeted thirtyfold since the 13th century, according to figures from Europe, which had the most extensive records — though researchers suspect global rates followed a similar downward trend.

3. Deaths from war have also been on a steady slide relative to the size of the population: War killed about 2 percent of people in the 17th century, but only 0.7 percent in the 20th century.

4. The world may seem more violent because of negativity bias: We notice things that are different, and potentially dangerous, more than what’s familiar and “safe.” The 24/7 news cycle and social media also expose us to more violent images than ever before.

A skull from Kenya shows signs of a violent death 10,000 years ago. (Credit: Marta Mirazon Lahr)

5. But don’t blame violent media for inspiring violent or aggressive acts. A 2009 analysis of previous research concluded there was no evidence to support the alleged connection.

7. But that abstract thinking may also be what gets us into trouble. While most non-human violence fulfills basic survival needs, human violence takes some unique forms, from sadism to terrorism to blood sports such as dogfighting.

8. Some researchers explain this wanton violence through “terror management theory”: To buffer ourselves from fear of death and reinforce our self-esteem and worldview, humans construct elaborate and sometimes violent defense mechanisms.

9. Much of other animals’ intraspecies violence is about competition for mates and the chance to pass on genes.

10. Males across species generally have less time and fewer resources invested in reproducing and raising offspring, which is why, researchers believe, they’re more likely to engage in riskier, often more violent acts to win mates.

11. But in species where males have a greater role in rearing young than females — such as seahorses and certain frogs and birds — it’s the females that are more likely to compete violently with each other.

12. Some scholars believe violence and vehemence may share a common Latin origin, a lost participle of the verb vehere, to carry.

13. And people have gotten carried away trying to predict violent behavior: The 19th century field of phrenology, for example, held that the shape of one’s skull could determine one’s propensity for criminality and violence.

14. Though phrenology fell out of favor, it helped pave the way for more robust neuroscience research by suggesting behavior was a function of biology, rather than one’s soul.

15. What about a biological link between our violent nature and walking on two legs? A 2011 study noted many quadrupedal species, such as dogs and horses, rear up to fight. It’s possible that, among our earlier, knuckle-walking ancestors, males who stood upright more habitually were better competitors and mated more, leading to our fully bipedal species.

16. Interpersonal violence has long been part of the genus Homo: A Neanderthal-like skull with multiple blunt force blows, from Spain’s fossil-rich Sima de los Huesos site, may be evidence of the earliest known hominin murder, more than 400,000 years ago.

17. Some researchers contend that pre-agricultural human societies were peaceful, but there’s growing evidence to the contrary: For example, at Nataruk, a 10,000-year-old site in Kenya, at least 27 individuals were left unburied, exposed to the elements. Of the 12 intact skeletons found among the fragmented remains, 10 showed evidence of lethal trauma, including possible arrow wounds.

18. Based on the other two skeletons’ hand positions, researchers believe they may have been bound when they died. Described in Nature earlier this year, Nataruk may represent the massacre of an entire hunter-gatherer unit.

19. Warfare has been bugging us — maybe literally — for millennia. Some studies blame a parasite-stress model: High infectious disease rates can exacerbate tensions such as xenophobia and strain resources, elevating the risk of conflict.