20 Things You Didn't Know About... Taste

Flavor-tripping, supertasters, trying food in the womb, and plenty more 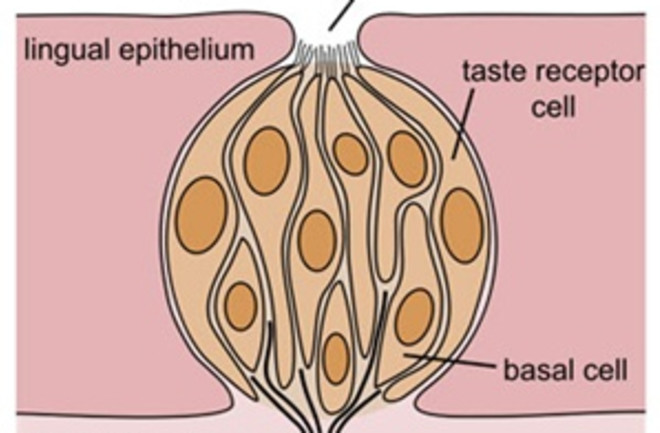 1  Remember the tongue map you learned about in junior high—the one showing taste receptors for sweet flavors on the tip of the tongue, bitter in the back, and sour on the sides? It’s totally wrong.

2  That bogus map came from an English mistranslation of a German research paper.

3  In truth, any area can pick up any taste (although sensitivity does vary across the tongue).

4  We all know about sweet, salty, sour, and bitter. Less widely known is the fifth taste: umami, that savory flavor of soy sauce, tomatoes, and many other foods high in glutamate.

5  Go with your gut: Japanese scientists recently identified umami receptors not only on the tongue but throughout the digestive tract. Their role in digestion and nutrition remains a mystery.

6  Those bumps on your tongue aren’t actually your taste buds. They are fungiform papillae—“mushroom-shaped nipples,” to any Latin speakers out there—and each houses 50 to 100 buds.

7  Scientists believe there are only a few receptor types each for sweet, sour, salty, and umami. But there are a lot more for bitter (at least 25), as anyone paying alimony is probably aware.

8  Our sensitivity to bitterness may have evolved to protect us from poisons. Most toxic plant compounds, such as strychnine and cyanide, taste bitter.

9  About 15 to 25 percent of all Americans are supertasters, people who have more papillae and taste buds than the rest of us.

10  Too sensitive for their own good: Supertasters turn up their noses at bitter but nutrient-rich veggies such as broccoli and kale. Taste expert Linda Bartoshuk at the University of Florida found this group more likely to have precancerous colon polyps than people with a below-average number of taste buds.

11  Cheeseburger with a side of amoxicillin? The major nerve carrying taste signals travels through the middle ear on its way from tongue to brain. Bartoshuk is exploring the link between frequent ear infections and a heightened affinity for fatty foods.

12  Good taste starts early. The flavors of some foods, such as carrots, garlic, and vanilla, wind up not only in mother’s milk but even in amniotic fluid. Julie Mennella at the Monell Chemical Senses Center in Philadelphia has shown that babies prefer foods they first “tasted” in the womb.

13  Odors inhaled by lactating mothers can affect the flavor of their milk, too. A poorly ventilated barn on a dairy farm can lead to unwanted funk at the breakfast table.

14  Celery, pork, and truffle mushrooms contain androstenone, an aromatic compound that strongly influences flavor. Half of all people cannot smell it, about 15 percent find it woody or floral, and the rest think it smells like stale urine.

15  Folks in the latter category generally are not big fans of celery, pork, or truffles.

16  Sweet treats and alcohol fire up many of the same reward circuits in the brain. Earlier this year, Mennella found that kids with a family history of alcoholism prefer more intensely sweet tastes.

17  And scientists came closer to explaining the munchies last January, when a team reported that endocannabinoids—chemicals related to the active ingredient in marijuana—enhance the taste of sweet foods.

19  The fruit has caught on among “flavor trippers,” who pop the berry—or a tablet containing miraculin—to make foods like lemons taste as sweet as lemon pie.

20  At the University of Florida, food scientists have genetically engineered the miraculin gene into tomatoes and strawberries. Their goal is to design low-sugar fruits and vegetables that taste supremely saccharine. How sweet is that?