17 Things You Didn't Know About... Your Brain

But soon your brain will know.

1  During the terrifying experience of sleep paralysis, the brain is temporarily both awake and asleep. It can happen to anyone but is especially common in survivors of trauma and war. 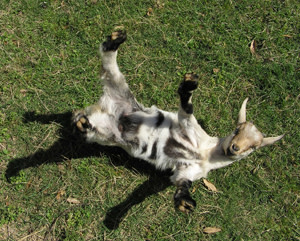 "Fainting" goats bave an inherited deficit in the neural control of their muscles. They collapse when surprised. Image courtesy of Sharon Reeves, R Fainting Farm

2  You have a fat head: Neuron cell membranes are made from fatty acids.

3  About 125 to 150 milliliters of cerebrospinal fluid (CSF) fills the space between the cerebral cortex and the skull. Spinal taps, which withdraw some of this fluid, can cause a short-term headache from the reduced CSF pressure.

4  The most common kind of vertigo happens when tiny calcium crystals in the inner ear detach and clump together, making the world seem to spin. Usually it is treated with head exercises that dislodge the calcium clusters.

5  Depression can cause the amygdala, one part of the brain involved in fear, to grow larger.

7  Even though our bodies weigh about the same, our brains are 10 times heavier than a sheep’s.

8  The brains of 2-year-olds consume twice as much energy as do adult brains.

9  Antidepressants such as Prozac stimulate the growth of new neurons in the brain. So does exercise.

10  The myth that we use only 10 percent of our brains may have started with Albert Einstein. (Actually, we use it all.)

11  When Albert Einstein died on April 18, 1955, his brain was removed by Princeton pathologist Thomas Harvey, who cut it into 240 pieces.

12  In the 1970s a New Jersey Monthly reporter discovered that Dr. Harvey still had Einstein’s brain in his basement, stored in mason jars marked “Costa Cider.”

13  If a female canary is given testosterone, the part of her brain responsible for song will enlarge, and she will begin to sing.

14  Prosopagnosia, the inability to recognize faces, can result from damage to the temporal lobe.

16  From birth, the brain matures from back to front. With aging, it degenerates in the opposite pattern.

17  Epilepsy can be hereditary or caused by brain damage, infectious disease, or tumors. Gustave Flaubert, Leo Tolstoy, Charles Dickens, Truman Capote, Napoleon Bonaparte, Socrates, and Vincent van Gogh are all believed to have suffered from epilepsy.