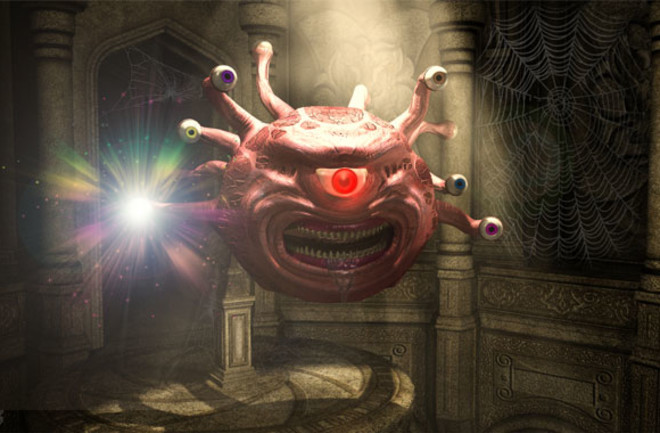 Alan Kingstone, a psychologist at the University of British Columbia, had a problem: all humans have their eyes in the middle of their faces, and there’s nothing that Kingstone could do about it. His 12-year-old son, Julian Levy, had the solution: monsters. While some monsters are basically humanoid in shape, others have eyes on their hands, tails, tentacles and other unnatural body parts. Perfect. Kingstone would use monsters. And Julian would get his first publication in a journal from the Royal Society, one of the world’s most august scientific institutions.

In 1998, Kingstone showed that people will automatically look where other people are looking

. Other scientists have since found this gaze-copying behaviour among many other animals, from birds to goats to dolphins. It seems fairly obvious why we would do this—we get an easy clue about interesting information in the world around us. But what are we actually doing? There are two competing answers. The obvious one is that we’re naturally drawn to people’s eyes, so we’ll automatically register where they’re looking. Indeed, one part of the brain – the superior temporal sulcus

– is involved in processing the direction of gazes. The equally plausible alternative is that we’re focused more broadly on faces, and the eyes just happen to be in the middle. After all, we see faces in inanimate objects, and we have a area in our brains—the fusiform face area

(FFA)—that responds to the sight of faces. One evening, Kingstone was explaining these two hypotheses to Julian over dinner. “A colleague had said that dissociating the two ideas -- eyes vs. centre of head -- would be impossible because the eyes of humans are in the centre of the head,” Kingstone said. “I told Julian that when people say something is impossible, they sometimes tell you more about themselves than anything.” Julian agreed. He thought it would be easy to discriminate between the two ideas: just use the Monster Manual

. This book will be delightfully familiar to a certain brand of geek. It’s the Bible of fictional beasties that accompanied the popular dice-rolling role-playing game Dungeons and Dragons. Regularly updated, it bursts with great visuals and bizarrely detailed accounts of unnatural history. It has differently coloured dragons, undead, beholders… I think one edition had a were-badger. Parts of this blog are essentially a non-fictional version of the Monster Manual. Levy knew that the Manual contained many nightmarish monsters whose eyes are not on their faces. If people still looked at the eyes of these creatures, it would answer the question. Kingstone loved the idea. He persuaded Julian’s teacher to give him some time away from school to test his ideas for himself, and she agreed. Levy asked 22 volunteers to stare at the corner of a screen, press a key to bring up one of 36 monster images, and let their eyes roam free. All the while, he tracked their eye movements with a camera (which he’s modelling in the photo above).

The recordings showed that when volunteers looked at drawings of humans or humanoids (monsters with more or less human shapes), their eyes moved to the centre of the screen, and then straight up. If the volunteers saw monsters with displaced eyes, they stared at the centre, and then off in various directions. The volunteers looked at eyes early and frequently, whether they were on the creatures’ faces or not. This isn’t just an academic exercise, says Kingstone. “If people are just targeting the centre of the head, like they target the centre of most objects, and getting the eyes for free, that's one thing. But if they are actually seeking out eyes that's another thing altogether,” he says. It means that different parts of the brain are involved when we glean social information from our peers. It might also help to explain why people with autism often fail to make eye contact with other people, and which parts of the brain are responsible. In the meantime, the paper describing the results—delightfully entitled “Monsters are people too”—has been published in Biology Letters. Kingstone wrote it with postdoc Tom Foulsham, but Levy did the rest. He prepared the images, trained himself to use the eye-tracker, ran the experiment, and coded all the data. Accordingly, at the current age of 14, he’s the first author on the paper. Reference: Levy, Foulsham & Kingstone. 2012. Monsters are people too. Biology Letters http://dx.doi.org/10.1098/rsbl.2012.0850