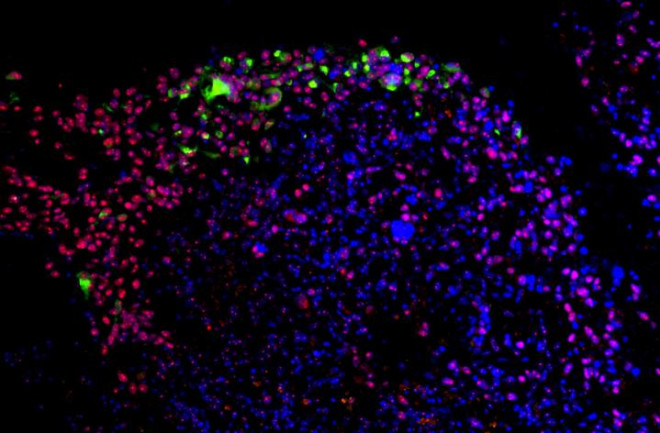 Zika virus (green) preferentially targets the stem cells (red) in a human glioblastoma. (Credit: Zhu et al., 2017) Zika has largely faded from the news cycle as efforts to control the disease have taken hold and the number of new cases has dropped. Now, it's back, not as a pending epidemic, but as a potential treatment for brain cancer. Researchers from the Washington University School of Medicine and the University of California, Santa Barbara have conducted preliminary tests with the virus as a treatment for glioblastoma, a particularly aggressive form of brain cancer. Zika, which doesn't carry many risks for adults, was worrisome because it excels at infecting developing brain cells. In fetuses infected while still in the womb, this could lead to microcephaly, a condition marked by severely stunted brain growth. In those with glioblastoma, though, the virus appears to target the very cells responsible for malignant tumor growth.

Brain tumors are the result of stem cells and neural progenitor cells gone bad, led astray by harmful mutations and growing out of control. In glioblastomas, these cells are hard to cut out completely, as they insinuate themselves into brain tissues, and often recur even after intensive rounds of chemotherapy. Most people with glioblastoma die within two years. Because brain tumors are formed by stem cells, the Zika virus is an ideal vector for targeting them. Unlike many viruses and compounds, it can cross the blood-brain barrier and, once there, homes in on brain stem cells while leaving mature cells largely alone. In tests with a modified version of Zika in mice with brain tumors, those exposed to the virus lived longer, although they weren't cured completely. The researchers also tried out the treatment on samples of human brain tissue in the lab, and found that applying it directly to the cancerous cells caused them to die. Tests in actual humans, however, are still to come. The research was published Tuesday in the Journal of Experimental Medicine. They also tried out a weakened version of the virus, genetically manipulated to cause fewer harmful side effects in humans, and found that its cancer-fighting abilities weren't impaired. In fact, when paired with a chemotherapy drug, the treatment worked even better. This isn't the first time a virus has been used to fight cancer — the concept is actually fairly widespread, based on the fact that viruses are already well-adapted to penetrate our cells. By either loading them up with tumor-destroying compounds or simply relying on the viruses themselves to kill cancerous cells, researchers have turned several different strains of virus into cancer treatments. Zika itself had already been picked out by UK researchers as a potential brain cancer therapy back in May, although results from those experiments have yet to be released.