Your genome is what you eat? 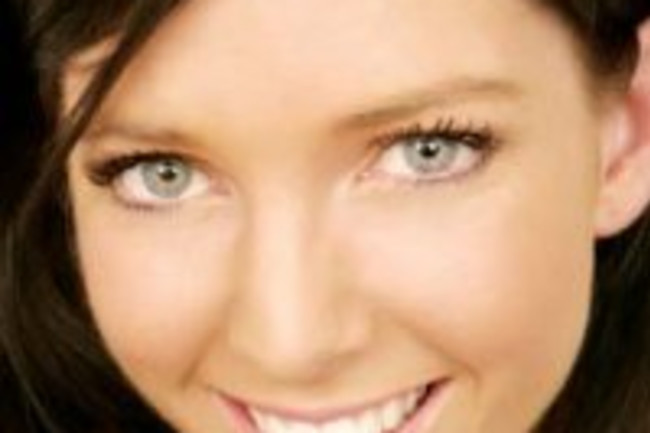 Interesting new paper in Genetics, Dietary Change and Adaptive Evolution of enamelin in Humans and Among Primates:

Scans of the human genome have identified many loci as potential targets of recent selection, but exploration of these candidates is required to verify the accuracy of genomewide scans and clarify the importance of adaptive evolution in recent human history. We present analyses of one such candidate, enamelin, whose protein product operates in tooth enamel formation in 100 individuals from 10 populations. Evidence of a recent selective sweep at this locus confirms the signal of selection found by genomewide scans.

We characterize a high-frequency nonsynonymous derived allele in non-African populations. The polymorphism occurs in codon 648, resulting in a nonconservative change from threonine to isoleucine, suggesting that the allele may affect enamelin function. Sequences of exons from 12 primate species show evidence of positive selection on enamelin. In primates, it has been documented that enamel thickness correlates with diet. Our work shows that bursts of adaptive enamelin evolution occur on primate lineages with inferred dietary changes. We hypothesize that among primate species the evolved differences in tooth enamel thickness are correlated with the adaptive evolution of enamelin.

This is a very interdisciplinary paper; props to the authors for that. Recent methods from evolutionary genomics, primatology, older molecular evolutionary techniques, a basic exposition of the physiological genetics of dentition and a broader palaeoanthropological framework were all tossed together to synthesize an explanatory narrative. Impressive, if a bit unfamiliar territory now and then. Using the Tajima's D method of detecting natural selection on about a dozen human populations the authors discovered that in regards to the ENAM locus non-African populations were fixed for a derived variant. Either this was due to a bottleneck during the Out-of-Africa event, or, it was the result of a selective sweep driven by new environmental conditions. Additionally, they used simulations with various demographic parameters to infer the greater plausibility of the hypothesis of positive selection as opposed to population history driven increases in allele frequency (bottlenecks sampling wildly upward the proportion, etc.). The fact that the derived variant also exhibits a nonsynonymous substitution suggests that there is a functional signficance to the change. To compelement this observation the he authors attempt sketch out with a rudimentary hypothesis for how the molecular genetic pathways could cause a change in the development of enamel. They also observe that Africans have thicker enamel than non-Africans, so that the genetic difference between Africans & non-Africans might be causal specifically in terms of this phenotype. Finally the paper also compared orthologous genomic regions in other primates; they wanted to get a bigger picture of the macroevolutionary history around ENAM via its non-human cognates. And what they found suggests a great deal of adaptation leading up to the human lineage (excess nonsynonymous substitutions) as well variation of phenotype which tracked diet. The authors conclude:

These data suggest that tooth enamel in non- African populations may be adaptively thinning to account for changing diets in the out-of-Africa expansion. Our hypothesis is that the nonsynonymous polymorphism alters the molecular function of enamelin, resulting in a change in enamel thickness. enamelinprovides an opportunity to look for an association between genotype and enamel thickness phenotype in human populations and to understand the role of adaptive evolution in creating human phenotypic diversity....

The next step is to do an assocation study in African Americans; they'd have the right mix of polymorphisms to see if the variation on ENAM really is what is causing the differences of enamel thickness. But what about their overall hypothesis? I'm looking at this through a recent human evolutionary lens. These sorts of papers don't exist in a vacuum. Results on amylase, LCT and ADH prime us to anticipate diet related evolution. Food affects fitness; a lot. This paper has a somewhat primatological focus; ergo, the reference to frugivores, folivores and omnivores. I'm not sure that the difference in Eurasia (as opposed to Africa) had that much to do with content of food. Rather, it might have had more to do with presentation and processing. Breads and gruels must have shown up soon after agriculture. We know that with agriculture peoples got smaller, more gracile, and their teeth shrunk. Why shouldn't enamel have become less robust as well? Below is Figure 2 from the paper. The font is small, so all you need to know is that rows are individuals, who are geographically clustered (so "SS" represents Sub-Saharan Africans), and the columns the sections of the genome. Changes in color represent changes in state. 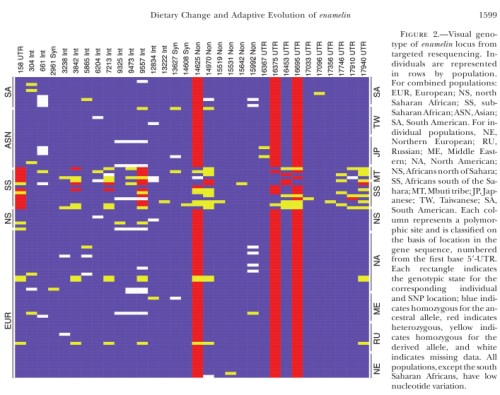