Scientists are still learning new things about our most striking feature. 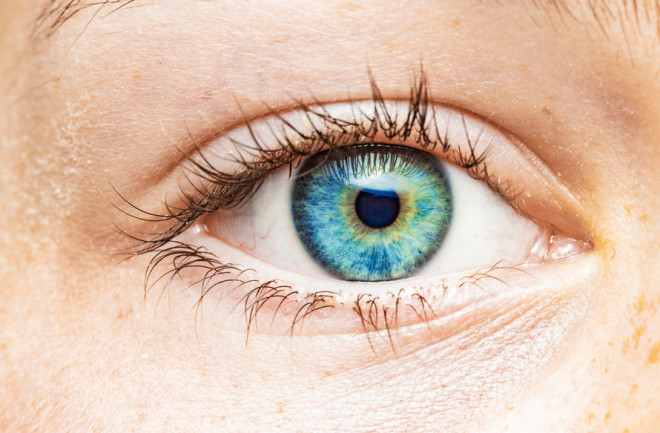 Eye color is complicated. But until a few years ago, few scientists described it that way. As recently as the aughts, it was believed that eye color was determined by a single gene — brown, dominant; blue, recessive. It’s a rule many may remember from high school biology class when studying Gregor Mendel, considered the father of modern genetics. But recent research has helped makes things much clearer. In fact, eye color is determined by multiple genes. And, further, eye color is as specific to an individual as a thumbprint.

In one of the most recent studies, published in Science Advances in March 2021, a team of researchers out of King’s College in London who looked at the eye color of 195,000 people and determined there are dozens of genes for eye color. “[Our eye color is] one of the most striking features of the human face,” says Pirro Hysi, an ophthalmologist at King's College and one of the study's authors. The findings not only give us a better glimpse into understanding eye color but the research is expected to help scientists find cures for eye diseases such as pigmentary glaucoma and ocular albinism.

The eyes have “mystified generations throughout our history,” says Hysi. In fact, it wasn’t until a breakthrough study published in 2007 that our perceptions about the complexity of the eye and its colors really paved the way for greater research. Researchers at The University of Queensland's Institute for Molecular Bioscience (IMB) and the Queensland Institute of Medical Research dispelled the notion that eye color was based on one gene.

Now, this most recent study has determined that there are at least 61-genes for eye color. Beyond that, the study authors say eye color is completely individualized. That is, no one else has your specific eye color. But what is your eye color, really — and where did all these seemingly-infinite shades come from in the first place?

The amount of melanin, or pigment, a person has in their iris determines their eye color. So, the more melanin you have, the darker your eyes appear. Globally, brown is the most common eye color. In the US, 45% of people have brown eyes, while the rarest eye color is green — only 9% of people in the US have green eyes.

But green-eyed people don’t have green-colored pigment in their irises. The color that we see is based on light reflection. Because lighter eyed people have less melanin, their eyes absorb less light. Further, the eye color we see comes from the top of two layers of the iris. No matter a person's eye color, the back layer of everyone’s iris — called the stroma — is made up of brown pigment.

While today we see a rainbow of eye colors throughout the world, that wasn’t always the case. According to the American Academy of Ophthalmology, around 10,000 years ago, humans had only brown eyes.

Where Did All the Other Colors Come From?

Scientists say it was a single genetic mutation that led to the endless variations in eye color you see today. Since eye color is determined by the amount of melanin in a person's body (as it is, too, for hair and skin color), researchers believe the addition of a new slew of colors, such as grays, blues, greens and hazels, was caused by a change in the gene that produces melanin; that mutation, scientists have surmised, reduced the production of melanin in the iris. And further, the mutation can be linked to a single, common ancestor.

Scientists speculate that the evolution of eye color paralleled the physical movement of our ancestors from warmer to colder climates. That’s because it's believed that melanin in the eyes also acts a protective barrier from the sun. Brown eyes are seen more frequently in hotter climates — such as Africa and Asia — while in Iceland, for example, brown eyed people are in the minority.

The protective barrier, or lack thereof, can also leave people open to different types of diseases. Research suggests that people with lighter colored eyes — and therefore, with less internal protection from outside sources — are more likely to develop macular degeneration, cancer of the eye or diabetic retinopathy. But brown-eyed people are not free from eye issues, either. Those with darker colored eyes have a higher risk of getting cataracts, a clouding of the lens caused by a breaking down of ocular proteins over time.

Blue-Eyed Babies and Other Myths

Doesn't it seem like babies are just naturally born with crystal-clear, blue eyes? Not so, say researchers at Stanford University who studied the prevalence of blue eyes in newborns. According to the 2016 study, two-thirds of new borns are born with brown eyes and only about 20 percent are blue eyed. What's more, many of those babies lose the blues within months of birth. And, the researchers also note, the majority of babies born with blue eyes are white; most Asian and Hispanic newborns are brown-eyed.

That said, if you’re a brown-eyed couple with a blue-eyed child, it wasn’t necessarily the work of the proverbial mailman. While Mendel’s rules may have led us to believe brown-eyed parents can’t have blue-eye babies, science can show us otherwise.