Your Bacterial 'Aura' Follows You From Place to Place 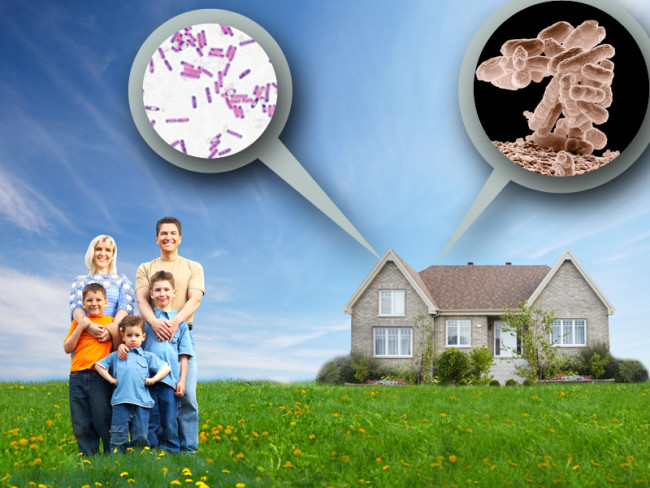 Housemates may share more than a Netflix subscription and a mortgage – they also host an abundance of shared microbes, which significantly shape a home's overall micro-environment, according to a new study.

Researchers from the U.S. Department of Energy’s Argonne National Laboratory and the University of Chicago have found that the communities of microbes living in individual homes are unique and identifiable, meaning humans sharing a home have a similar microbial “aura.” And, these microbial passengers follow us wherever we go, swiftly populating new homes, and even hotel rooms, within less than a day of occupancy.

The study was conducted as a part of the Home Microbiome Project, which aims to understand how humans interact with, and influence, the bacteria in their homes.

The bugs were collected from seven U.S. families (comprising 18 people, three dogs and one cat), who dutifully swabbed their homes and themselves every day over the course of six weeks. Samples included microbes from hands, feet and noses, as well as doorknobs, light switches, floors and counter-tops.

The study subjects were ethnically diverse, and not all occupants in individual homes were genetically related. Three of the families moved to new homes during the course of the study – one of them from a hotel room.

By performing DNA analysis on these daily swabs, researchers were able to characterize the different species of microbes within each dwelling, and how they changed over time.

Millions of bacteria were sequenced and identified from the project. The researchers found that every home has a unique bacterial fingerprint, which follows families when they move. When comparing the surfaces of the old and new homes, researchers found them almost identical in microbial makeup – suggesting that our bacteria settle down in new places before our boxes are even unpacked. What’s more, a household’s fingerprint is unique enough that the researchers could use an unidentified floor sample to predict which of the seven families it came from.

Within a household, hands were most likely to contain similar bacteria, while noses showed the most variation. Pets made a significant contribution to the house’s microbial makeup, in line with previous research that found that two strangers who own dogs share as many microbes as people cohabiting do.

Researchers also found that physical contact may influence your microbial makeup. In one home, none of the occupants were genetically related. But, the two occupants who were in a relationship shared more bacteria than the third housemate. And, parents and their children have markedly similar microbial makeups. The results are published in Science this week.

Through our microbes, then, it seems we could be leaving more of a mark on our surroundings than we ever imagined – which the researchers say could prove useful for forensics in the future.

In their study, when someone departed his or her house for a few days, researchers could discern that person’s absence in the microbial aura. And by piecing together samples from different surfaces, researchers say they could pin down a pretty precise chronology of comings and goings within a house.

So, next time you sit down to relish the calm of a clean house, remember that you’re not quite alone – nor would you want to be.