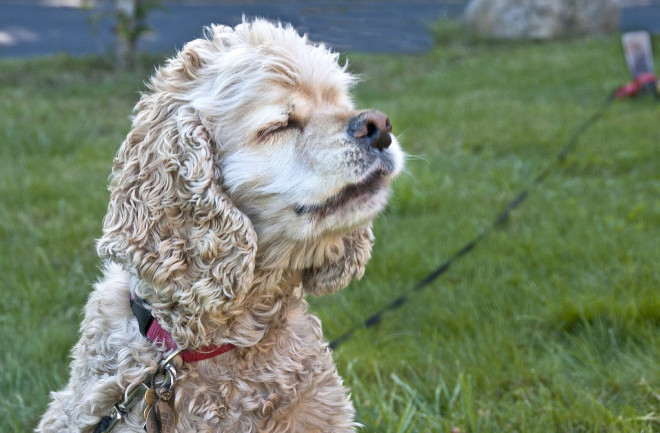 Photo: flickr/liz westMany people think that animals can smell fear, but it's hard to differentiate between what an animal smells and what it sees and hears (for example, a screaming human running at full-speed away from it). Fear not! These scientists set out to test whether dogs can actually smell human emotions. To do so, they collected armpit sweat from people who were scared and happy, then exposed dogs to different people while letting the pups smell the sweat. They found that the dogs "displayed more stressful behaviors" when exposed to fear-sweat, and they were more likely to approach strangers when they smelled happy-sweat. Yum!Interspecies transmission of emotional information via chemosignals: from humans to dogs (Canis lupus familiaris) "We report a study examining interspecies emotion transfer via body odors (chemosignals). Do human body odors (chemosignals) produced under emotional conditions of happiness and fear provide information that is detectable by pet dogs (Labrador and Golden retrievers)? The odor samples were collected from the axilla of male donors not involved in the main experiment. The experimental setup involved the co-presence of the dog’s owner, a stranger and the odor dispenser in a space where the dogs could move freely. There were three odor conditions [fear, happiness, and control (no sweat)] to which the dogs were assigned randomly. The dependent variables were the relevant behaviors of the dogs (e.g., approaching, interacting and gazing) directed to the three targets (owner, stranger, sweat dispenser) aside from the dogs’ stress and heart rate indicators. The results indicated with high accuracy that the dogs manifested the predicted behaviors in the three conditions. There were fewer and shorter owner directed behaviors and more stranger directed behaviors when they were in the “happy odor condition” compared to the fear odor and control conditions. In the fear odor condition, they displayed more stressful behaviors. The heart rate data in the control and happy conditions were significantly lower than in the fear condition. Our findings suggest that interspecies emotional communication is facilitated by chemosignals." Related content: People can sniff out criminals…literally.Clever canines catch colon cancer cues contained in crap.Flashback Friday: Worst scientific job ever? Doggy breath odor judge.