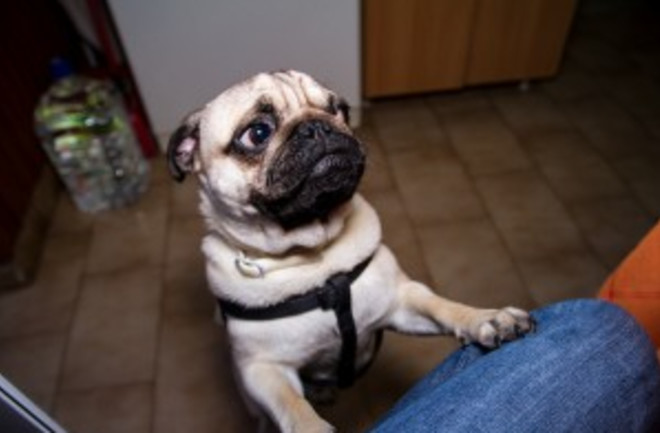 As we've recently learned, toddlers can feel schadenfreude. So how about dogs? Well, no one's tested them for schadenfreude (yet), but in this study, the researchers found that dogs experience a related emotion: jealousy. To test this, they watched dogs' reactions when their owners paid attention to either a stuffed dog or a jack o' lantern (a control). They found that the dogs displayed more jealous behaviors, such as snapping at the object and getting between their owner and the object, with the stuffed dog. The authors could tell that the dogs thought the toy dogs were real because "86% of the dogs sniffed the anal region of the toy dog during the experiment or post-experiment phases." What more proof do you need?

Jealousy in Dogs "It is commonly assumed that jealousy is unique to humans, partially because of the complex cognitions often involved in this emotion. However, from a functional perspective, one might expect that an emotion that evolved to protect social bonds from interlopers might exist in other social species, particularly one as cognitively sophisticated as the dog. The current experiment adapted a paradigm from human infant studies to examine jealousy in domestic dogs. We found that dogs exhibited significantly more jealous behaviors (e.g., snapping, getting between the owner and object, pushing/touching the object/owner) when their owners displayed affectionate behaviors towards what appeared to be another dog as compared to nonsocial objects. These results lend support to the hypothesis that jealousy has some “primordial” form that exists in human infants and in at least one other social species besides humans." Related content: Dogs that look like puppies are more likely to be adopted.Sorry, you probably don’t understand your cat’s meows.NCBI ROFL: Classifying dogs’ facial expressions from photographs.