No one knows for sure why we (or our pets) yawn. But some hypotheses hold more weight than others. 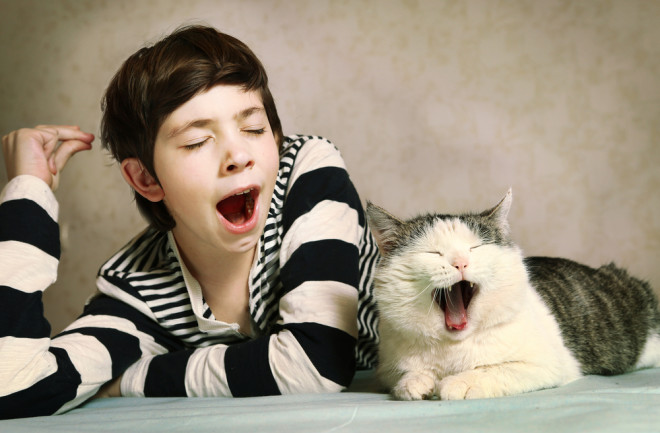 You can feel it coming on — that sudden urge to nearly unhinge your jaw and suck in as much air as your lungs can handle. But what makes you do it?

Yawning is a ubiquitous activity in humans, and many other species as well. But few hypotheses as to why we do it have been rigorously tested, leaving researchers with a whole lot of ideas and not much evidence to back them up. To this day, there is no general consensus on why we yawn — though some theories hold more weight than others.

One of the oldest theories about yawning — dating back to Hippocrates’ time — is that it can increase blood circulation to the brain. But in recent decades, research has shown that there isn’t evidence to back up this idea.

A widely-cited study published in 1987 tested this idea on a cohort of 18 college students. They were asked to breathe in air with varying concentrations of oxygen and carbon dioxide, though the researchers did not tell them what concentrations they were inhaling at the time. In the end, the different concentrations of gasses had no impact on how often the students yawned, showing that yawning was not necessary for their bodies to make up for lack of breathable oxygen in some conditions.

However, yawning might have a different benefit to the brain, one that has some evidence to back it. A few studies in recent years have shown that yawning could help with temperature regulation for our most vital organ.

In 2014, researchers in Austria and the U.S. published a report where they surveyed 120 participants on how often they yawned after viewing images of other people yawning during either winter or summer. They found that the proportion of reactionary yawns was significantly higher in the summer than in the winter — 41.7 percent to 18.3 percent, respectively — suggesting that the involuntary action might have something to do with how our bodies regulate to keep cool in warmer temperatures.

And a few years later, another group of researchers tested the thermoregulation hypothesis on people with medically-induced fevers. Twenty-two participants either got a shot that included a pyrogen — an agent found in bacteria such as E. coli that causes fevers — or a placebo. Then, the researchers monitored the participants and videotaped their reactions to see how often they yawned in the four hours following their injection.

Those with fevers yawned much more than those who got the placebo shot, particularly when their body temperatures were increasing immediately after injection. The authors also noted that higher yawning frequency did seem to correlate with less sickness symptoms and feelings of nausea in participants with fevers.

That points to another question — does yawning have any outstanding benefit to the rest of our bodies? Many hypotheses have cropped up over the years to suggest that yawning could have a benefit for the lungs, for example. One idea is that a yawn can help distribute a protective wetting agent called surfactant in the lungs and prevent them from collapsing. But there is little-to-no data to support that claim, or many others of similar fare.

However, one of the most intriguing finds that's come out of research in the last few decades is that yawning is influenced by social factors.

You might find yourself yawning as you read this. That’s because yawning is highly contagious — even when we’re just thinking about it, or just looking at photos of people with their mouths stretched and eyes squinted in that ever-so-recognizable way.

Studies have shown that dogs can pick up yawns from their owners, and chimpanzees frequently catch yawns from others around them. Some researchers hypothesize that this is due to empathy; humans and chimpanzees have both exhibited a tendency to be more susceptible to the yawns of those they’re close with.

Although we still don't have a clear understanding of why we feel the urge to yawn, one thing's for sure — it's hard to escape that feeling once it grips you.