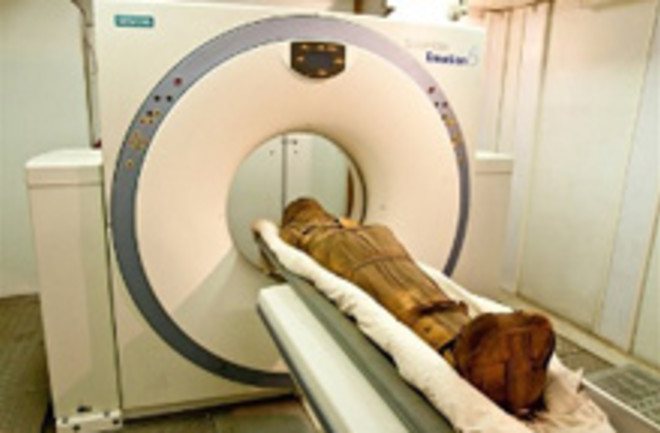 The elites of ancient Egypt had money, power, divine status in the case of the pharaohs, and also heart disease. In a study in today's issue of The Journal of the American Medical Association, a team of researchers reports performing x-ray scans of 20 Egyptian mummies and finding them rife with cardiovascular disease like clogged arteries, one of the commonest ailments in modern American society.

On a visit to the Museum of Egyptian Antiquities in Cairo, one of the researchers had been intrigued by a nameplate on the remains of Pharaoh Merenptah, who died in 1,203BC. The plate said the pharaoh died at the age of 60 and suffered diseased arteries, arthritis and tooth decay [The Guardian]

. So the scientists obtained permission to scan that mummy and others in the museum collection. The common people of ancient Egypt weren't mummified; only elites like royal families, their nursemaids, and priests got such a treatment.

The elites ate salted fish, bread, and cheese like everyone else, but they also dined on rich foods such as cow, sheep, and goat meat, as well as honey and cakes with butter, says Abdel Nureldin, a professor of Egyptology at Cairo University, who worked on the investigation. At the same time, virtually no one in ancient times was sedentary, and that may have helped counteract their fatty diets [ScienceNOW Daily News]

. Still, the researchers found, 16 of the 20 x-rayed mummies showed signs of heart disease.

Men and women were affected equally. The most ancient of the mummies afflicted with atherosclerosis was Lady Rai, who had been a nursemaid to Queen Ahmose Nefertiti. She died at the age of 30 or 40 around 1530 BC, about 300 years prior to the time of Moses and 200 years before King Tut [Los Angeles Times]

. Because only elite Egyptians were preserved so well after death, researchers can't say how widespread cardiovascular disease might have been in the ancient society, or the ancient world at large. But what the finding does tell them is that while heart disease is exacerbated by the overindulgent and sedentary style of modern life, there's more to it than that. Related Content: 80beats: 19th Century Mummy Autopsy Flubbed the Cause of Death 80beats: Egyptian "Scorpion King" Made Medicine from Herbs & Booze 5k Years Ago 80beats: Could Stem Cells Patch Up a Broken Heart?Image: Michael I. Miyamoto