Worst Science Article of the Week: Lose Weight by Reading? 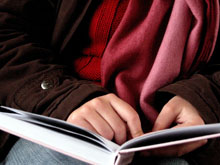 Not so fast. Before you click over to Amazon.com, let’s take a closer look at the study they’re talking about:

Researchers at Duke Children’s Hospital asked 31 obese girls ages 9 to 13 to read an age-appropriate novel entitled Lake Rescue that was “carefully crafted” with weight management tips and positive role models. The novel follows the overweight heroine on an outdoor school trip, during which she gains self-esteem (rather than pounds) and learns about healthy eating and exercise.

Another group of girls was asked to read a novel not related to weight issues—about a girl searching for a missing cat—and a control group did not read either book. All participants were already enrolled in a comprehensive weight loss program.

Even the press release seems confused, first claiming a “significant decrease” in BMI, but three paragraphs later, saying "the BMI decrease attributed to the book is small."

Whatever correlation the researchers are trying to draw between reading and weight loss seems weak at best. There are too many variables unaccounted for: Was the control group barred from reading? Could they read literature containing positive messages?

And here's another question: Why would reading a book with no relevance to weight loss also decrease BMI? Since all the girls were already part of a comprehensive weight loss program, one would assume that they were receiving the same weight management guidance in non-fiction form. So are they talking about subliminal messages here? Or the power of narrative fiction to burn pounds from your body? No doubt the ailing publishing industry would love to hear that one.