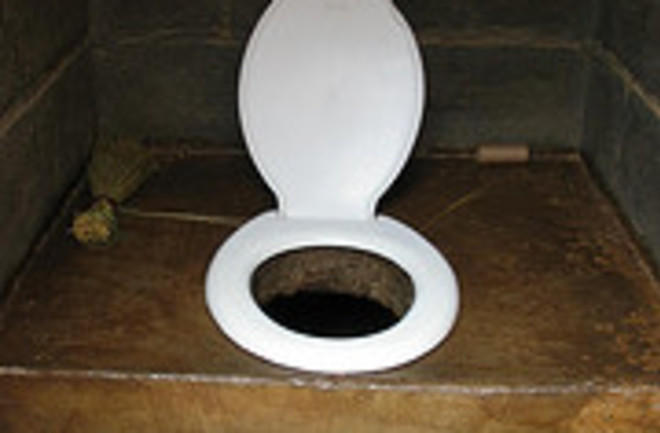 Photo: flickr/SuSanA SecretariatIf you think your job is bad, just wait until you get a (nose-)load of this one: pit latrine odor judge. Eugh! Although it's obvious that pit toilets smell pretty nasty, it's less clear how to go about battling the odor ogres. The first step in developing anti-stink technology is determining which chemicals cause the stink. These researchers used a combination of chemical and human analysis to identify the smelly compounds from pit latrines in Africa and India (spoiler alert: there's lots of sulfur). So the next time you feel bad about humanity, think about these scientists who sacrificed their noses for the benefit of pit toilet users everywhere. Latrine odor judges: we salute you!Qualitative and quantitative analysis of volatile constituents from latrines. "More than 2.5 billion people defecate in the open. The increased commitment of private and public organizations to improving this situation is driving the research and development of new technologies for toilets and latrines. Although key technical aspects are considered by researchers when designing new technologies for developing countries, the basic aspect of offending malodors from human waste is often neglected. With the objective of contributing to technical solutions that are acceptable to global consumers, we investigated the chemical composition of latrine malodors sampled in Africa and India. Field latrines in four countries were evaluated olfactively and the odors qualitatively and quantitatively characterized with three analytical techniques. Sulfur compounds including H2S, methyl mercaptan, and dimethyl-mono-(di;tri) sulfide are important in sewage-like odors of pit latrines under anaerobic conditions. Under aerobic conditions, in Nairobi for example, paracresol and indole reached concentrations of 89 and 65 μg/g, respectively, which, along with short chain fatty acids such as butyric acid (13 mg/g) explained the strong rancid, manure and farm yard odor. This work represents the first qualitative and quantitative study of volatile compounds sampled from seven pit latrines in a variety of geographic, technical, and economic contexts in addition to three single stools from India and a pit latrine model system." Related content: NCBI ROFL: Morning breath odor: influence of treatments on sulfur gases. NCBI ROFL: How the hell does one end up as a doggy breath odor judge? NCBI ROFL: The fecal odor of sick hedgehogs mediates olfactory attraction of the tick Ixodes hexagonus.