World Science Festival: The High-Tech Side of the Sporting Life 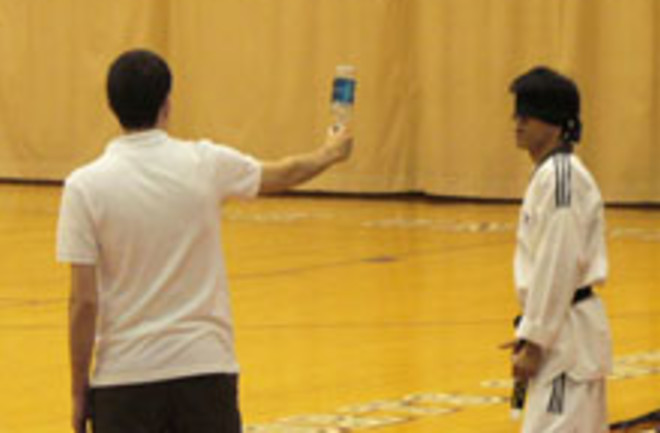 A baseball can't curve without its laces, a tennis ball's fuzz helps it travel further, and the dimples on a golf ball reduce drag, just like the ridges on a shark. These tidbits of trivia introduced a capacity crowd packed into the purple bleachers of New York University's Cole Sports Center to the World Science Festival's "Science of Sports" event Saturday afternoon. Former U.S. Olympic Committee director of coaching Tom Crawford led the event. The presenters opened with nutrition science, especially important for the young athletes and their families who packed the gym. Three professional basketball players, Leilani Mitchell and Lisa Willis from the WNBA's New York Liberty and Brevin Knight of the NBA's Los Angeles Clippers, helped about 10 elementary school-aged participants pick healthy food from a table. (Here's a tip: After a workout, drink chocolate milk. Besides refueling you with proteins and carbohydrates, it's delicious.) But the presenters brought a high-tech bag of tricks as well. Dan Deperno from the State University of New York at Cortland demonstrated Dartfish, a video system that allows athletes to compare themselves to others, or to their own past performances, by superimposing multiple images together. For one high school pitcher who was left-handed but wanted to model his throwing motion after right-hander John Smoltz of the Atlanta Braves, Deperno used the video system to flip the student's image so he looked right-handed. Then Deperno pasted him in with footage of Smoltz throwing in a bullpen, allowing side-by-side comparison of the two, and helping the high school pitcher throw with a healthier motion. Of course, there's more to sports than motion. There's thinking, or perhaps even more useful, learning not to think, according to Baylor College of Medicine neuroscientist David Eagleman. To demonstrate high-level athletes' concentration, Eagleman had them sink free throws while the audience screamed at fever pitch—the players actually shot more accurately with the background noise than without. It's all about getting the conscious part of your brain to be quiet, Eagleman said. So if you ever need a sure-fire way to throw your tennis opponents off their game, he told the audience, ask them to explain how their serve works.