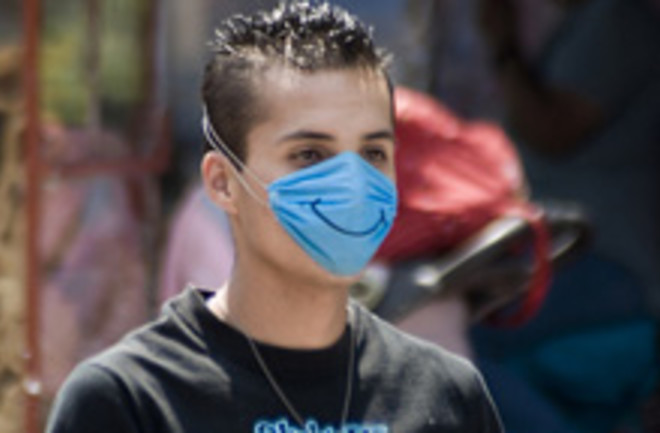 In response to the continued spread of swine flu, which is now going by the more technical name H1N1, the World Health Organization raised its pandemic alert level from 4 to 5 yesterday, indicating that the virus is being spread between humans in at least two countries and that a global epidemic is imminent. Health officials stressed that now is the time for all countries to activate their pandemic preparedness plans, and to focus on mitigation strategies--namely, increased surveillance, early treatment for patients, and infection control in all health facilities.

“Containment is no longer a feasible option,” Dr. Keiji Fukuda, deputy director general of the World Health Organization, announced Monday night in Geneva after a meeting of the agency’s emergency committee on the spreading swine flu virus. “The world should focus on mitigation. We recommend not closing borders or restricting travel” [The New York Times].

In more recent comments addressing the U.S. decision not to close the border with Mexico, President Obama argued that such a move would be “akin to closing the barn door after the horse is out.” But although many health officials say that the further spread of the virus is inevitable, it's not at all clear how much threat it poses.

So far there seem to have been around 159 fatalities among perhaps 2000 cases in Mexico, although only a small number of these have been confirmed in the laboratory as influenza infections. Although this suggests a scary fatality rate of around 10%, there has so far been just one death outside of Mexico – of a 23-month-old Mexican child in Texas, who had recently been in Mexico. The "case fatality" of the virus is not yet known [New Scientist].

Epidemiologists say it's quite likely that many more mild cases occurred in Mexico that were never reported, which could mean that the fatality rate is closer to one to two percent. The Mexican government has shut down all non-essential government services for five days, and has urged citizens to stay home during that time to avoid infection. In the United States, 93 cases of H1N1 flu have been reported in 11 states, and some schools have been closed in eight states to avoid spreading the virus through schoolchildren. Meanwhile, officials reported a few more confirmed cases in Europe, with new cases in Germany, Austria, Switzerland, and the Netherlands. Related Content: 80beats: First U.S. Death From Swine Flu Is Reported as Outbreak Spreads 80beats: As Swine Flu Spreads, Focus Shifts to a Potential Vaccine 80beats: Fears of a Swine Flu Pandemic Increase as the Virus Goes Global 80beats: Deadly Swine Flu Outbreak in Mexico City Prompts Fears of a Pandemic 80beats: Bird Flu in Egypt and Swine Flu in California Raise Guarded Concerns