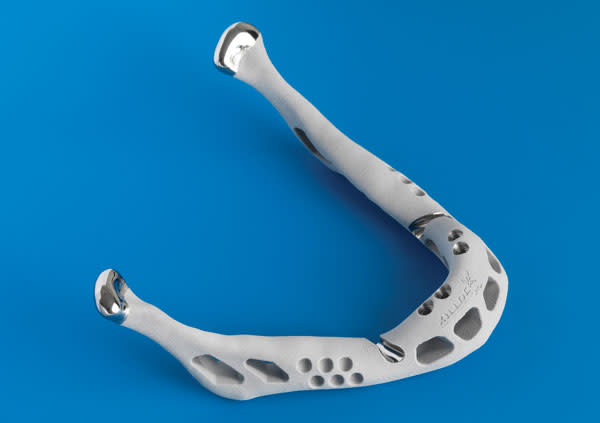 , her Belgian doctors announced Monday. The woman's own lower jaw was riddled with infection, and given her age, and the fact that reconstructive surgery would have been a long and painful process, her doctors decided to have a new jaw specially manufactured for her. The replacement jaw is made out of titanium, assembled in thousands of layers by a 3D printer. It took 4 hours of surgery to get the jaw in place, but that's just a fifth of how long a reconstructive surgery session would have been. She will receive follow-up surgery later this month to have permanent dentures attached to the jaw. The new jaw is about 30% heavier than her old jaw was, but the doctors say she'll get used to it. Someday, though, patients may be able to get replacement bones printed in more bone-like material: scientists are working on getting 3D printers to accept calcium-based substances as ink