With Iron Nanoparticles, Cryopreserved Tissue Springs Back to Life 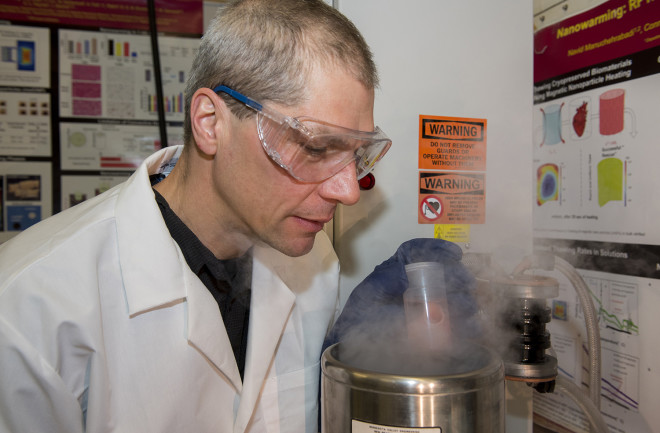 Senior author John Bischof and a sample. (Credit: University of Minnesota) Every year, thousands of donated organs go to waste because they cannot be matched with recipients in the brief window of time in which they are still viable. Extending the shelf-life of organs could help alleviate this problem, potentially cutting into waiting lists for organs where many patients languish for years. Chilling organs at extremely low temperatures and then reheating them when they are needed is one current solution. The freezing and reheating process still needs work before we start shipping large inventories of tissues to "organ banks," but scientists are making progress. University of Minnesota researchers reported Wednesday that they have developed an innovative way to quickly and safely warm tissues from sub-zero temperatures—a technique that could greatly increase the viability of donated organs.

Heating From the Inside

Their method, described in a study published Wednesday in Science Translational Medicine, involves injecting a solution of silica-coated iron nanoparticles into tissues and bathing them in electromagnetic waves, causing them to heat up from the inside. This allows for more uniform heating than other methods, preventing damage to the tissues caused by thermal stress. The researchers say that they have successfully used the technique in pig blood vessels and heart valves — tissues many times larger than used in any previous experiments.

A transmission electron microscopy (TEM) image shows the iron oxide nanoparticles coated in a mesoporous silica that are used in the tissue warming process. (Credit: Haynes research group/University of Minnesota) The tissues they worked on were preserved through a process called vitrification, or soaking organs in a cryoprotectant solution and cooling them to around -250 degrees Fahrenheit. The process forestalls ice crystal formation, which could damage the tissues, and instead maintains a liquid state of very high viscosity, similar to glass. Organs preserved in this way could theoretically remain viable indefinitely. Problems arise, however, when we try to warm them back up. The organs must be warmed quickly enough that ice crystals do not form, but evenly enough that differences in expansion rates do not damage the tissue. Previous efforts using convective heating only restored samples of tissue up to 3 milliliters in volume, far smaller than an organ. The U of M researchers use an electromagnetic field to excite the nanoparticles, which causes them to generate heat. This is called inductive heating, and because the researchers designed their nanoparticles to spread out evenly within the solution, all parts of the tissue heat at the same time. They scaled their experiment up to 50 milliliters, large enough to bring pig arteries back from a vitrified state, although not yet large enough to do the same for an entire heart. They plan to next work on rabbit kidneys vitrified by Greg Fahy, a cryobiologist who successfully cryopreserved and transplanted a rabbit kidney over a decade ago. To do so, they will need to achieve heating of samples of around 80 milliliters.

Entire Organs? Not Yet

Other obstacles remain in the quest to fully preserve entire organs. The cooling systems that work for smaller samples of tissue haven't yet been tested in large organs, where they may not spread evenly throughout the system as well. In addition, perfusing organs that are more dense may present its own challenges, as an even distribution of nanoparticles is necessary for the method to work. Organs like the heart, with its cavernous ventricles, are more amenable to the technique, while others, like the kidneys, are more compact. Larger organs will also require larger and more complex equipment for heating, although the technology for that already exists, the authors say.

The radiofrequency coil used in the experiment and a heart sample. (Credit: University of Minnesota) "I can tell you from a scientific point of view that the scale-up into the organs is going to be a major undertaking with many different investigators. It’s a highly interdisciplinary challenge," says John Bischof, associate director for the Institute of Engineering in Medicine at the University of Minnesota, and a co-author of the paper. "But the technology for those tissue banks and those types of tissues, the technology exists now and that’s really why I think this paper is getting as much interest as it is. As far as getting to the organs, I mean this is one of the things that we want to underscore here not only in the discussion but also in the paper; we’re not there yet." Kelvin Brockbank, CEO of Tissue Testing Technologies and an author of the paper, estimates that it will be around a decade before most organs can be cooled and re-heated with the technology.

As for bodily cryopreservation, which could allow us to freeze our bodies now and reinvigorate them centuries later, the researchers are less optimistic. "Once you have done a whole organ, there is a certain intellectual connecting of the dots that takes you from the organ to the person," Bischof says. "While it’s attractive to think that maybe one day we'll be able to freeze down and bring back whole people or bodies ... we are so far away from that in terms of the complexity of much of those systems." Brockbank agrees: "Even if we could preserve the whole body, the chances that the neural pathways, which have been established during life, being maintained during and after cryopreservation are probably remote, at this point." So, while we may not be injecting ourselves with iron nanoparticles and turning ourselves into glass anytime soon, we could be doing it to our organs in the near future. Instead of having donors wait anxiously for organs to become available, the technology may flip the situation, allowing the organs to wait for us.