With A New Microscope, Researchers May Be Able to See DNA Activity 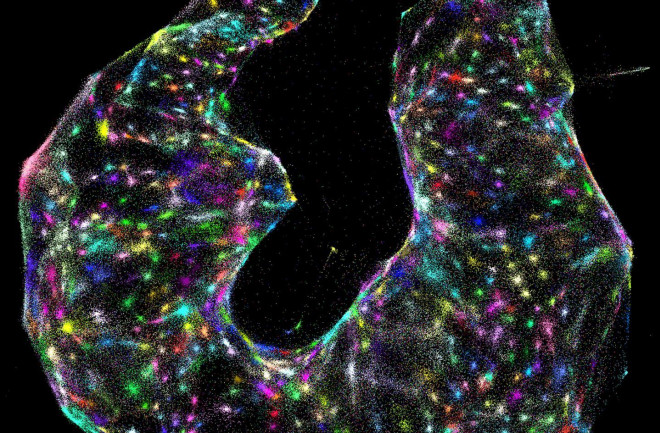 Joshua Weinstein spent hours in graduate school pulverizing zebrafish in a blender. That was a normal first step toward sequencing the fish’s genes, but it had a high “ick” factor — and he felt like it wasn’t very good science. Although his results would tell him about the fish’s overall genetic activity, they couldn’t reveal which genes were present and active in different places: like inside the fish’s immune tissue or its nerves, or within a cancerous tumor. And he wanted to know.

So Weinstein co-developed, and this year unveiled, what he calls a DNA microscope. It’s actually not a physical piece of lab equipment, but a technique that allows researchers to examine precisely what genetic activity is happening where. Although some colleagues quibble with calling the development a microscope, several agree that it could offer profound new insights into how cells function.

Je Lee, an assistant professor at Cold Spring Harbor Laboratory on New York’s Long Island, compares traditional gene sequencing techniques to looking at the ground from a satellite. You can see a lot of detail, but you can’t see what’s going on inside a shopping mall. Metaphorically, the DNA microscope can, Lee says.

The “coolest thing” about the new technique is that it allows scientists to see gene activity deep within cells because it doesn’t depend on the bright lights of a traditional microscope, says Justin Crocker, a synthetic developmental biologist at the European Molecular Biology Laboratory in Heidelberg, Germany. “This is the first group to pull it off in a way that seems like it actually worked.”

Theoretically, the approach could be used to understand exactly what’s going on inside a tumor — such as how many cells are cancerous and how many more are likely to turn dangerous. “That’s a real strength of the technique,” Crocker says.

The technique works by assigning a unique tag to every copy of a given active gene across a tissue sample. These tagged segments of DNA, keeping their spatial orientation in the sample, are multiplied — doubling every minute. The molecules become so numerous that they spill out from their origin points and bump into the tagged bits of DNA overflowing from neighboring cells. The tags grab onto one another, so the DNA molecules pair up — creating a record of which genes originated near each other.

Researchers then process this information using a combination of DNA sequencing and artificial intelligence to generate 3D maps of which genes were active in the sample, and where. This view could reveal previously unseen spatial relationships between genes across cells.

With the new technology, researchers can see gene activity across a tissue sample at a much higher resolution (B) than was possible with old, optical techniques (A). (Credit: Weinstein et al./Cell 2019)

Weinstein says he hopes his technique, published in June in the journal Cell, will become part of a wave of new approaches that move away from averaging genetic activity across whole organisms — like in those blenderized fish — and toward a more cell-specific view. “A lot of the stuff we need to pay attention to, to truly understand these systems,” he says, “needs to be learned by new methods — new ways of probing the inner workings of cells.”

One of the advantages of the DNA microscope, Weinstein says, is that it only requires lab pipettes and a standard DNA sequencer to yield results.

But Lee and Crocker say it may not be as cheap and easy as Weinstein thinks. So far, Weinstein and his coauthors have only shown that their idea is theoretically possible. Applying it to larger-scale projects may prove more challenging, Lee says. “Their paper captures the imagination. It’s a completely new way of doing microscopy,” Lee says. “It’s up to the scientists to decide whether it’s practical.”

And while it might be relatively inexpensive for Weinstein to sequence DNA at the major research institutions where he’s worked, Crocker says, “the computational firepower you need would be pretty extensive,” and not easily available, for example, at hospitals that wanted information on patients’ tumors.

This fall, Weinstein launched his own lab at the University of Chicago. Prior to that, he worked at the Broad Institute and MIT in the labs of Aviv Regev, who is leading an effort to map all the types of cells in the body, and of Feng Zhang, who was among the discoverers of the CRISPR gene editing tool. Regev and Zhang are the other two authors on the DNA microscope paper.

Despite making advances in the field of biology, Weinstein’s background is in physics. He still tries to understand the world by boiling it down to its simplest parts, as a physicist would. Biology, he says, can’t be broken down as easily or understood as intuitively — but that’s part of its appeal. “It’s such a great magnet for physicists who like being puzzled,” he says. “[It’s] kind of the perfect kindling for crazy ideas.”