Will Unlocking the Genome of Body Lice Help Us Destroy Them? 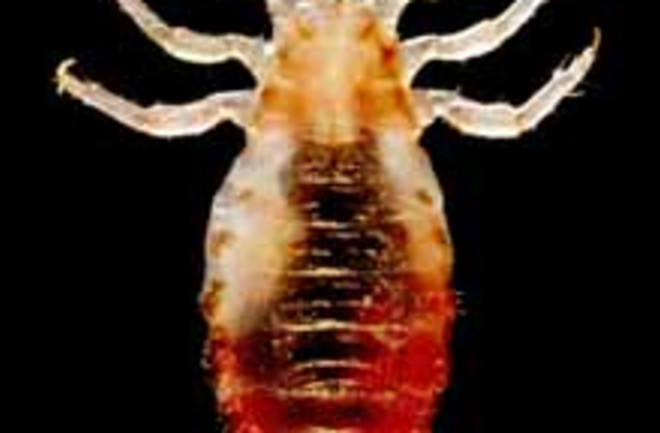 It doesn't take much to be a vile, bloodsucking pest. You, human, have three billion base pairs in your genome, but the body louse—which has been a typhus-spreading scourge of humanity for millennia—carries just 108 million. That's what scientists say today in a study in the Proceedings of the National Sciences that describes how they sequenced the body louse genome. Because the body louse (a separate creature from the head or pubic louse) lives entirely on humans, hatching in our clothes and eating our blood, its genome can get away with being so streamlined, study author Barry Pittendrigh says:

"Most of the genes that are responsible for sensing or responding to the environment are very much reduced," Pittendrigh said. The body louse was found to have "significantly fewer genes" for smell and taste, as well as minimal genes responsible for a "simple visual system," the study authors wrote. They found just 10 genes to code for odor receptors [Scientific American].

Human blood isn't exactly a fully balanced meal, and the stripped-down louse genome doesn't allow for making some of the missing ingredients itself. So, the scientists found, lice thrive by living symbiotically.

The new genomic analysis has revealed a source of at least one of those missing nutrients: the sequence of a bacterium living in the body louse,

Riesia pediculicola, turned up several genes involved in the synthesis of vitamin B5. Without that bacterium, the body louse is doomed [Nature].

The louse genome makes a nice addition to the library of genomes now on file, including the fruit fly, honeybee, and multiple mosquitoes. Lice could prove particularly interesting because they're so simple. In addition to having a small genome, they also don't go through complete metamorphosis. Instead, adults develop gradually from the young. And there's the practical: If we know our enemy, then maybe we can kill them. The researchers found that body lice carry few genes that would help them detoxify harmful compounds, perhaps because their diet is so homogeneous they don't need to worry about it. That might provide a way to target them. Or, now that we have the genome of the helper bacterium, we could target it instead and doom the lice that way. Related Content: DISCOVER: Lice Meet the Hair Dryer of Death

DISCOVER: Your Body is a Planet

Discoblog: What Head (and Other) Lice Tell Us About Evolution