Experts say there's no proof of an IQ boost, but it could help in other ways. 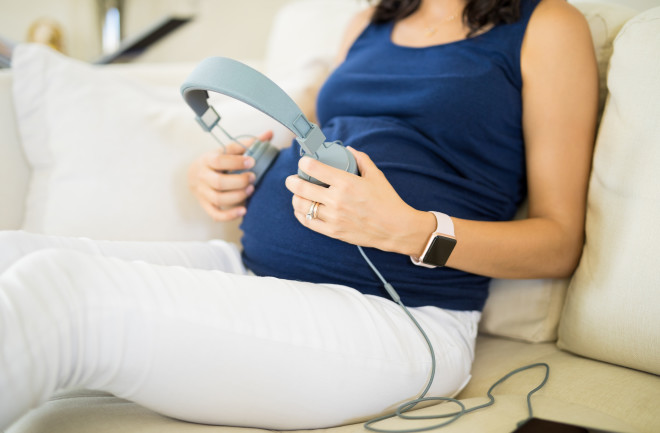 When J. Paul Neeley's wife was pregnant with their now two and a half year old daughter, the cellist would host private evening concerts in the couple's living room. “I would play the Bach cello suites while my wife would sit back and try to relax,” says Neeley, a U.S. citizen currently living in London, England. “In the later months before the birth we would sometimes notice kicking from the baby seemingly recognizing music at these concerts.”

After birth, the same music appeared to calm the baby, keep her focused and help her get to sleep. Now, their daughter appears to excel in all things related to music. “She has a great sense of time and very good pitch,” Neeley says. “She can also identify the emotion or mood of the music. Her dancing and facial expressions will mirror that feeling.”

The couple has hosted musical performances for their now one-month-old, as well, finding that both children appear to benefit from the early exposure to music. “I'm sure these are musical developmental milestones that most children go through, but we definitely feel these have been reached very early when compared to her peers,” he says of his eldest child. “It has brought us a lot of joy to see [our children] engaging with and enjoying the music.

As parents look to give their children any boost they can in early life, the prospect that music can provide an array of developmental benefits — like boosting a child's IQ — is appealing. However, so far, researchers have not actually proven this to be true.

The so-called "Mozart effect" dates back to an early 1990s claim, which stated that exposure to the artist's music enhanced spatial reasoning skills for a period after listening. Studies in animals appear promising: Chicks and rats exposed to music before birth have shown increased ability to navigate mazes. Scientists credit this exposure for generating new neurons in the brain's memory-focused hippocampus. Yet, for now, experts hesitate to make any similar claims about humans.

“Babies certainly do react to sounds; they react to music so we know that that occurs,” says Thomas Dardarian, an osteopathic physician and OB-GYN at Main Line Women’s Health Care Associates in Rosemont, Pennsylvania. “But because of compound variables there’s nothing proven in any study that shows [parents] exposing their babies to classical music in utero helps with IQ [or] helps with music ability.”

In Neeley's case, his daughter's musical talents could stem from early exposure or they could simply be tied to her genes given her father's background, Dardarian suggests.  “It certainly doesn't hurt — by any stretch of the imagination — to expose your baby to music in utero,” he adds. “It might stimulate a desire within them through the music that will develop and encourage them.”

Babies start to hear at about 24 weeks gestation. They can pick up their parents' voices and other sounds in the same way we hear underwater. And deeper baritone voices typically travel better, at least in the early stages, doctors say.

So is one type of music better than any other? While classical music is the typical default used in studies, experts don't think it should really make too much of a difference.

Osteopathic physician and OB-GYN Octavia Cannon, co-owner of Arboretum Obstetrics and Gynecology in Charlotte, North Carolina, says any music that has repetition and varied pitch should be effective, though musical taste would be more likely to develop after birth. “I can specifically remember sitting next to one of my patients in church when she was pregnant with twins,” Cannon says. “Those babies started jumping up and down like crazy as soon as the drummer started playing and the choir began singing gospel music!”

Dardarian agrees that parents shouldn't be too worried about what type of music to play. “You're not going to create an ADHD baby by playing rock 'n' roll,” he adds.

Cannon says she often tells her patients to play music for their babies while pregnant and suggests they play music when they want to get the baby to move. Beyond that, if nothing else, listening to music should benefit the mother because it lowers stress and lower stress benefits the baby as well. “There's definitely integration between maternal wellbeing and fetal wellbeing,” says Dardarian. "If mom wants to come home from work and listen to soothing music, it's going to be a benefit to both her and the baby.”