Will gray wolves adopt strange pups or give them the cold shoulder? 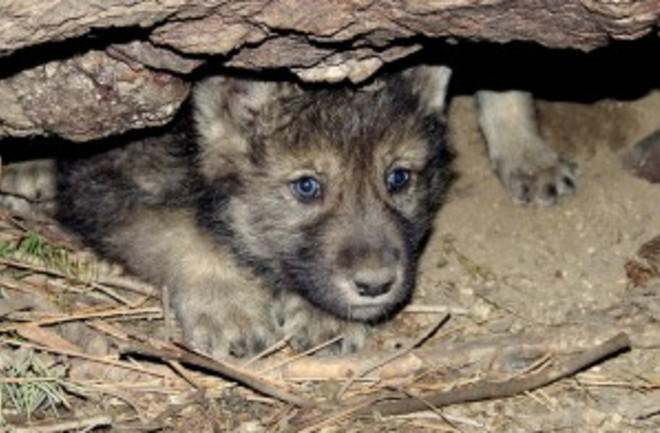 Image: Flickr/Hilary CooleyAnimal babies are pretty cute, and there are many stories of animals rearing babies that aren't their own--sometimes even from different species. Scientists hope to one day harness this instinct and trick gray wolves from dwindling populations into rearing pups born in captivity. Not only will this help the zoo-born young learn to live in the wild, but it can also increase the size of shrinking gene pools. But the authors of this study wanted to test this plan in a way that doesn't leave newborn pups out in the cold. To do so, they investigated whether captive wolves would foster babies from other other litters. In the end, four separate females each adopted and fostered two pups who went on to be as healthy as any of their own. How cute is that!?Cross-fostering in gray wolves (Canis lupus lupus). "Cross-fostering in canids, with captive-bred pups introduced into endangered wild populations, might aid conservation efforts by increasing genetic diversity and lowering the risk of inbreeding depression. The gray wolf (Canis lupus lupus) population in Scandinavia suffers from severe inbreeding due to a narrow genetic base and geographical isolation. This study aimed at evaluating the method to cross-foster wolf pups from zoo-born to zoo-born litters. The following was assessed: female initial acceptance of foster pups, growth rate in relation to age difference between foster pups and pups in recipient litters and survival over the first 33 weeks. The study included four litters added by two foster pups in each. The age differences between the foster pups and the recipient litters were 2-8 days. After augmentation, all four females accepted the foster pups, demonstrated by her moving the entire litter to a new den site. Growth rate was dependent on the age difference of the pups in the foster litters, with a considerably slower growth rate in the 8 days younger pups. However, these pups later appeared to be at no disadvantage. Foster pups had a higher survival rate than females' pups, however, the causes of death were probably not kin or non-kin related. The results indicate that cross-fostering works in gray wolves and that this might be a plausible way to increase genetic variation in the wild population." Related content: When scared, baby roller birds vomit in your general direction.The road to baby torture is a slippery slope.What makes a cute baby cute?