Why you should always make important decisions on an empty stomach. 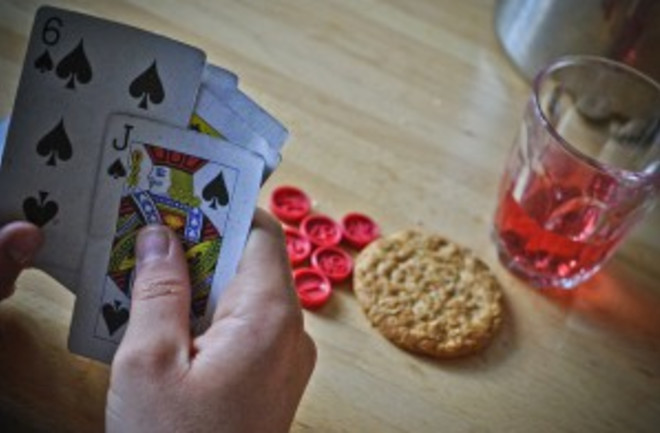 If you're anything like me, you get pretty grumpy when you're hungry (a condition also known as "hangry"). However, according to this study, being hungry also helps you make better decisions. To test this, the researchers forced subjects to fast for a night. When the subjects arrived at the laboratory the next day, the scientists served some of them breakfast, but made the others wait. All of them then took the "Iowa Gambling Task", a psychological test based on gambling that is supposed to simulate real-life decision making (you can try it yourself via an iTunes app). The researchers found that the subjects who were hungry actually made more advantageous choices and performed better than those who were sated. Being hungry also helped people resist choices that were disadvantageous in the long run, even if they brought immediate big rewards. There you have it: people make better choices when hungry. So the next time you go to a casino, consider skipping the buffet.

Always Gamble on an Empty Stomach: Hunger Is Associated with Advantageous Decision Making "Three experimental studies examined the counterintuitive hypothesis that hunger improves strategic decision making, arguing that people in a hot state are better able to make favorable decisions involving uncertain outcomes. Studies 1 and 2 demonstrated that participants with more hunger or greater appetite made more advantageous choices in the Iowa Gambling Task compared to sated participants or participants with a smaller appetite. Study 3 revealed that hungry participants were better able to appreciate future big rewards in a delay discounting task; and that, in spite of their perception of increased rewarding value of both food and monetary objects, hungry participants were not more inclined to take risks to get the object of their desire. Together, these studies for the first time provide evidence that hot states improve decision making under uncertain conditions, challenging the conventional conception of the detrimental role of impulsivity in decision making." Related content: NCBI ROFL: Why poor, hungry men prefer bigger breasts.Flashback Friday: Holding a live crocodile can make gambling problems worse.Is poker a game of skill or chance?