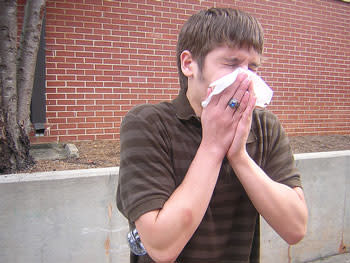 Takin' one for the team.

What's the News: Clearly, as anyone suffering through a cold right now can tell you, our immune systems aren't all they could be when it comes to keeping us disease-free. And what's worse, the same viruses that have some people hawking up phlegm for weeks can give their roommates or spouses no more than a brief sniffle, hammering home the fact that the immune system wealth isn't distributed evenly. Why hasn't evolution dealt with this problem already and given us all impenetrable defenses? As it turns out, it's not just that evolution takes its own sweet time. It's also that a species benefits from having individuals be immune to some things and vulnerable to others, a new study shows