Why We Buy Weird Things in Times of Crisis

With COVID-19 making its way around the United States, people are emptying stores of toilet paper. Archaeology throws a light on other bouts of odd consumer behavior. 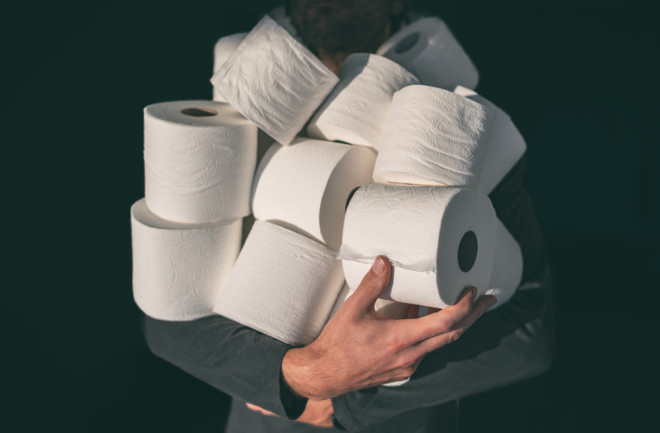 The world is in the grip of a serious pandemic as a novel virus sweeps from continent to continent, causing cases of sometimes-deadly COVID-19. Yet much of the global social media response has centered around a somewhat trivial and comical side effect: the hoarding of toilet paper. News reports cover accounts of people coming to blows over the resource; people are continually posting photos of empty supermarket shelves; and jokes about people building Game of Thrones–style seats out of boxes of TP are going viral.

It’s not just toilet paper that’s flying off the shelves: People are also buying pasta, beans, soap, hand sanitizer, and other supplies, including paper towels. Stocking up on essentials during a crisis is not a bad idea, so long as it doesn’t deprive others of what they need. Panic buying, at least in some cases, makes sense—even for TP. New social-distancing practices, closed schools, and telecommuting mean that Americans will use more toilet paper in the coming weeks. It’s mathematical, really. We’re being asked to spend more time at home, less time at work, school, or out and about. And our bodily systems don’t change in the meantime.

But toilet paper obviously won’t stop the virus or ameliorate its social, economic, or health impacts. From a strictly functional perspective, other materials, including flimsy facial tissues, work just as well. Frankly, if one gets quarantined without toilet paper, one can simply jump into the shower to clean up. And in the case of strict quarantine measures, I suspect people will wish they had stockpiled something else over TP—like nonperishable foods.

So, what’s going on? Have we collectively lost our minds? Perhaps.

Co-opting American economist Alan Greenspan’s wonderful term, I believe such consumers are engaged in a bit of “irrational exuberance,” where people temporarily lose sight of a commodity’s true value. As more people buy TP, the shelves go empty and others panic, buying ever more TP while they still can. Perhaps the frantic quest for something simple, tangible, and mundane helps to distract people from larger worries and provide comfort in a hugely uncertain time. Perhaps toilet paper acquisition has become a signal of economic prosperity and foresight. Or maybe it’s just that TP is funny.

From an archaeological perspective, I’m particularly interested in how human garbage has highlighted other bouts of odd consumer behavior or responses to scarcity in past times. Frantic TP buying won’t be the first or last spate of irrationality.

People seem to be disproportionately interested in toilet habits. Two years ago, I published a column post for SAPIENS provocatively titled “What Did Ancient Romans Do Without Toilet Paper?” To date, it has been read more than half a million times, and has been on the SAPIENS “most popular” list for nearly two years.

That column post reminded readers that toilet paper is an artifact—a technology—with a fascinating history. To make a long story short, TP didn’t become common in the United States until the 1920s, when the Hoberg Paper Company marketed Charmin to women, emphasizing its softness and femininity. (Making another long story short, that post also introduced readers to the tersorium, a sponge-on-a-stick used by ancient Romans to clean their nether regions after defecating. There’s a great business opportunity!)

The current obsession with TP may have something to do with people’s apparent interest in bathroom habits. But it also highlights something interesting about human responses to crisis and scarcity. Consumers’ purchasing behaviors during such times are not always rational, and that’s especially clear in retrospect. For a fascinating example of this, I’d like to draw your attention to one of my favorite archaeological projects of the 20th century: the Garbage Project.

In 1973, archaeologist William Rathje of the University of Arizona, Tucson, decided to use standard archaeological excavation and analytical techniques to study the content of American garbage cans, dumpsters, and landfills. After all, Rathje realized, that is exactly what archaeologists do when we study ancient cultures—we study their garbage (as well as other things, including architecture, settlement patterns, ritual behavior, etc.). The difference for the Garbage Project, as it came to be known, is that Rathje and his team were able to interview the households and individuals who created the garbage, thereby combining sociology, economics, marketing, psychology, and archaeology into an illuminating whole.

The Garbage Project’s findings, as outlined in Rathje’s 2001 co-authored book Rubbish! The Archaeology of Garbage (with Cullen Murphy), were both unsurprising and enlightening. People underestimate, and in some cases lie about, their alcohol consumption and drug use, for example. No surprise there. Contrary to public opinion, however, Rathje and his team found that disposable diapers did not (and do not) constitute a large proportion of landfills. That honor went to newspapers and other printed material, along with construction debris and plastics. Today construction debris and plastics of all kinds still dominate; newspapers have gone by the wayside in the digital age.

When the Garbage Project launched in the early 1970s, economic times were tough. The stock market lost 45 percent of its value from 1973 to the end of 1974. Inflation was high, unemployment was high, and some products were in short supply. Most famously, in retaliation against then-U.S. President Richard M. Nixon’s emergency military aid for Israel, Arab members of OPEC agreed to a 1973 oil embargo and stopped exporting oil to the United States. By March 1974, the price of gas had quadrupled, and there were severe shortages. I remember well seeing lines of big, burly, gas-guzzling cars lined up for blocks, their drivers engaged in a desperate effort to fill their tanks. That led to a lot of panic buying of other products, too, as supply chains were disrupted.

Then there’s beef. As hard as it is to imagine today, in August 1971, the Nixon administration imposed sweeping wage and price controls in an effort to stave off inflation. Those price controls included beef, pork, lamb, and other meats, and would last until April 1974. During that period, beef prices were kept so artificially low that producers could not make money, so ranchers often kept hold of their cattle rather than selling them to slaughterhouses. That led to supply shortages. With scant supply, consumers bought lower-quality cuts of beef like skirt steak, brisket, and stew meat to replace demand for the harder-to-get better cuts of meat like steaks, roasts, and tenderloins.

As the Garbage Project revealed, however, this lower-quality beef often ended up spoiled and in the trash: Many consumers apparently did not know how to properly cook (or simply did not like) those cuts, so they were often thrown out. That led to a counterintuitive tripling in the amount of beef waste during a time of scarcity.

As an anthropologist, I find today’s frantic TP-buying phenomenon interesting for another reason too: It seems to have become an act of identity construction, a way of defining ourselves as individuals and as a group.

A good friend of mine recently posted a tongue-in-cheek photo of himself holding a newly acquired 40-roll case of toilet paper on his right shoulder, like a modern-day Atlas, the Greek Titan, upholding the terrestrial sphere. He was just being funny. But an anthropologist like me might observe that in so doing, my friend publicly displayed his resourcefulness, social status, economic power, and ability to provide for his family. With apologies to Thorstein Veblen, the sociologist and economist who in 1899 coined the term “conspicuous consumption” to explain the purchase and display of luxury items among the very rich, I would argue that my friend engaged in a digital, middle-class act of conspicuous consumption to demonstrate his economic virility in a time of crisis.

When the COVID-19 crisis eventually passes, I suspect people of the future will look back and be baffled by the current obsession with stockpiling TP. There are much bigger and more serious challenges surrounding the global pandemic, as will become clearer in the United States and elsewhere in the days and months ahead.

Whatever happens, 2020 will surely stand out in the future as a starkly anomalous year, just as we look back on 1973 as an anomaly for its stock market crash and supply shortages. Back then, television talk show host Johnny Carson also flamed a toilet paper shortage by telling a joke about it to his 20 million viewers. Hysteria works in mysterious ways.

This work first appeared on SAPIENS under a Creative Commons license. Read the original here.