Chimeras, blends of two species of animal, could one day provide better lab models for scientists and organ transplants for patients. 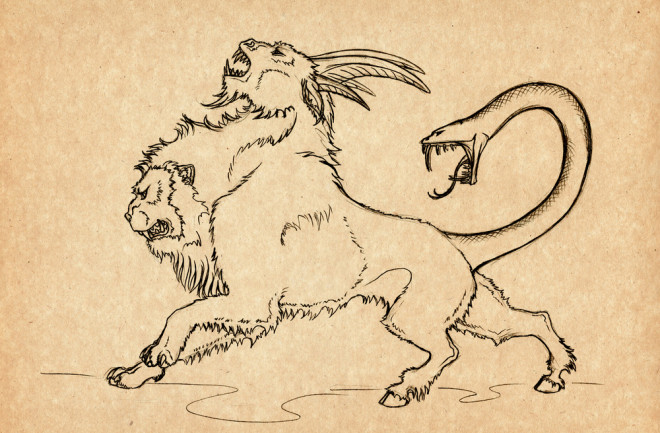 In the Iliad, the Greek poet Homer describes a fearsome beast known to inhabit Asia Minor, one known as a chimera. The ferocious creature had the head of a lion, the body of goat and the tail of a serpent, and it purportedly breathed fire.

This mythical chimera has been left in the pages of legend. But scientists today are making chimeras of their own, blending together cells from multiple species in a single animal.

The term resurfaced most recently after news broke that a team of researchers had created human-monkey chimeras by inserting human stem cells into cynomolgus monkey embryos at a very early stage of development. The embryos, which were never implanted in the womb and weren’t allowed to fully develop, grew to contain a blend of human and monkey cells.

The chimeras restarted a decades-old debate about the ethics of creating such creatures. While there are scientific and medical advantages to creating animals of more than one species, some scientists point to our still-growing understanding of how chimeras develop and behave as reason for caution. And creating blended species, especially those involving human cells, brings fraught ethical conundrums we still have no easy answers to.

Creating Chimeras in the Lab

Experiments that involved placing cells from one species into another actually date back decades. As far back as the 1960s, scientists were attempting to create a cross between quails and chickens, and in 1973, other researchers reported the first mouse-rat chimera.

In the mouse-rat chimera experiment, scientists placed cells from a developing rat inside mouse embryos in their very earliest stages, called blastocysts. As the embryos grew and developed, cells from both species divided and mingled to create an animal that was both rat and mouse. Other experiments have created chimeras of two bovine species, as well as sheep-goat chimeras. Scientists have found it much easier to create chimeras from species that are evolutionarily close to each other, like mice and rats, or humans and monkeys.

Still, some experiments involving placing human cells in other creatures have found limited success. Researchers in 2013, for example, placed human brain cells inside the brains of neonatal mice. Not only did the mice survive, they performed better than ordinary mice in standard cognitive tests.

That’s what the researchers did in their experiment with monkey-human chimeras. They took 132 monkey blastocysts and injected each with 25 human pluripotent stem cells. Then, they allowed the embryos to develop in the lab for around 20 days. Genetic tests of the embryos revealed human cells in all 132, meaning that cells from both humans and monkeys were growing inside of them. Most of the embryos didn’t survive — a little over 100 made it to ten days, and just three were alive after 19 days. The embryos that still contained human cells declined over time, too, totaling around one-third by day 13. But the results nevertheless showed it’s possible to create human-monkey chimeras in the lab, opening the door to future research.

Why Do We Blend Species?

Chimeras inevitably spawn comparisons to Frankenstein, mutants and a range of other science fiction creations. But the reality of such species-blurring creatures today is far less exciting. Most chimeras are made from species that are closely related to each other, and the process doesn’t imbue them with special characteristics. Much of the work done today is focused on creating better animal models to study drugs and disease with, or to advance research into organ transplantation.

Mice are used today to study a broad range of human conditions. But, as versatile as the mouse model is, it can’t always faithfully replicate human conditions. Researchers today will sometimes insert specific genes from humans into mice to make them better models for specific conditions. But creating mouse-human chimeras composed of a true blend of human and mouse genes would make mice a far better tool for medical research. That could accelerate medical research, potentially leading to new treatments for debilitating conditions.

Scientists today are also pursuing the use of animal organs for transplant into humans, known as xenotransplantation. Organs from genetically-modified pigs, for example, could one day be used in humans. But there are many barriers to taking an organ from one species and putting it in another, such as the possibility of a body rejecting the donation. Chimeras could allow doctors to grow fully human organs inside an animal for transplant. In the first steps toward that possibility, scientists in 2010 grew a rat pancreas inside a mouse.

Creating chimeric animals in the lab raises a raft of ethical issues, some old and some brand new. A group of researchers lays out the main controversies in a 2016 Nature review paper. The health and welfare of a chimera would need to be taken into account, as with any animal scientists use in the lab. Would chimeras experience additional suffering as a result of their interspecies heritage? Are they being treated well during their lives?

Donor stem cells are also sometimes taken from human embryos, which has raised concerns in the past among some groups. Human stem cells harvested in this fashion might be used for chimeras in the future.

Inserting human stem cells into an animal blastocyst to create chimeras means that those cells might go on to become part of many different tissues and organ systems as the animal develops. The consequences of that kind of widespread integration of chimeric cells aren’t currently known. But it’s conceivable that some of those cells might end up being neural or germ cells. It seems likely we’d view an animal with brain or reproductive cells from a human differently than one with, say, human liver cells. In those cases, the ethics of “humanization” start to become more meaningful.

There’s currently little consensus on how we should view animals that have been made more human. Are they deserving of additional rights? Is there a definite line between human and non-human in a chimeric animal? Questions like these remain to be answered, by both scientists and society at large.

For now, scientists don’t have the ability to create true human-animal chimeras, and only a limited ability to create chimeras of other species. Given the issues involved, it’s unclear how far research into the matter might progress, and how quickly. But unlike the fire-breathing lion-goat-snakes of legend, chimeras today are undoubtedly real.