Why Michael Jackson Might Be Buried Without His Brain 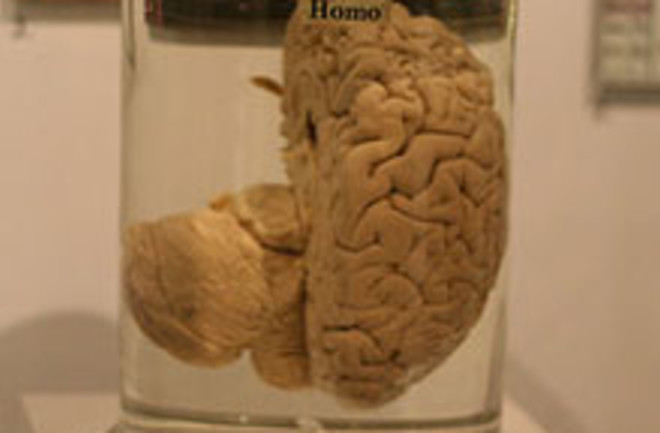 Between the plastic surgeries and Neverland, some may conclude that Michael Jackson had lost his mind prior to his death. Well, now it's being taken to literal levels: He'll likely be buried without his brain. Apparently, scientists need to remove the pop star's brain to finish his autopsy. And because it takes about two weeks for a brain to "harden" before it can be examined, if he's laid to rest before then, his body will have to be buried without it. Letting a brain "harden" is standard autopsy protocol when the brain is suspected of playing an important part in the death, as it would with a drug overdose. According to Mind Hacks, a neuroscience and psychology blog:

[Hardening] involves removing the brain from the skull and leaving it to soak in a diluted mixture of formaldehyde and water called formalin. This soaking process usually takes four weeks and the brain genuinely does harden. A "fresh" brain is a pinkish colour and has the consistency of jelly, gello or soft tofu meaning it is difficult to examine and the various internal structures are often hard to make out. After soaking the brain, it has the consistency and colour of canned mushrooms making it easier to slice, examine and photograph. However, because the brain is so soft to start with, it can't just be dropped in a tank of fixing solution, because it will deform under its own weight. To solve the problem it is usually suspended upside down in a large bucket of formalin by a piece of string which is tied to the [brain's] basilar artery. After it has 'hardened' or 'fixed' it is sliced to look for clear damage to either the tissue or the arteries. Small sections can also be kept to examine under the microscope.

In an autopsy like this, the scientists will be looking for long- and short-term brain damage. On the other hand, maybe some might speculate it's all a ploy to figure out if the King of Pop was actually cloned. Related Content: Discoblog: Military Members to Donate Their Brains to Science Discoblog: Will Drilling a Hole in Your Head Cure Alzheimer’s? Discoblog: Need to Perform Brain Surgery? Better Grab Your Black & Decker Image: flickr / aigarius