Why meat dishes are spicier than vegetable dishes. 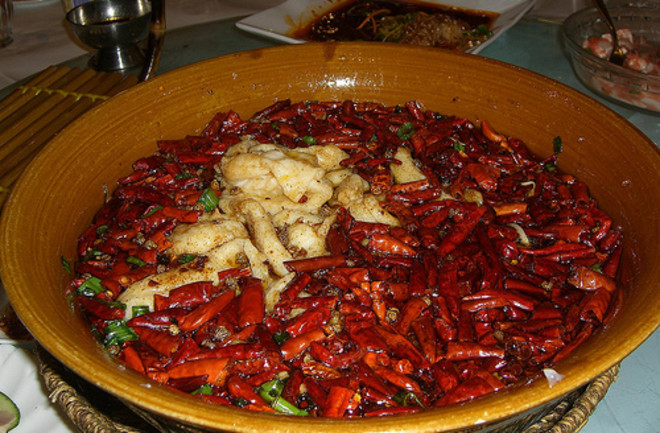 Photo: flickr/AlphaSpices not only enhance the flavor of foods we eat, but they also have anti-microbial properties that can keep food from spoiling. And as anyone who has had their power go out in the summer can tell you, meat products spoil much faster than vegetables due to growth of bacteria and other microbes. So if it's true that a major reason spicy foods have been popular for so long is because they help prevent spoilage, one might expect traditional meat dishes to be spicier than vegetable dishes. Here, the authors did a scientific analysis of the spiciness of dishes in 100+ cookbooks from 36 countries... and found exactly that. Why vegetable recipes are not very spicy. "Spices are aromatic plant materials that are used in cooking. Recently it was hypothesized that spice use yields a health benefit: cleansing food of parasites and pathogens before it is eaten, thereby reducing food poisoning and foodborne illnesses. In support, most spices have antimicrobial properties and use of spices in meat-based recipes is greatest in hot climates, where the diversity and growth rates of microorganisms are highest. A critical prediction of the antimicrobial hypothesis is that spices should be used less in preparing vegetables than meat dishes. This is because cells of dead plants are better protected physically and chemically against bacteria and fungi than cells of dead animals (whose immune system ceased functioning at death), so fewer spices would be necessary to make vegetables safe for consumption. We tested this corollary by compiling information on 2129 vegetable-only recipes from 107 traditional cookbooks of 36 countries. Analyses revealed that spice use increased with increasing ambient temperature, but less dramatically than in meat-based recipes. In all 36 countries, vegetable dishes called for fewer spices per recipe than meat dishes; 27 of these differences were significant. Of 41 individual spices, 38 were used less frequently in vegetable recipes; 30 of these differences were significant. Proportions of recipes that called for >1 spice and >1 extremely potent antimicrobial spice also were significantly lower for vegetable dishes. By every measure, vegetable-based recipes were significantly less spicy than meat-based recipes. Within-country analyses control for possible differences in spice plant availability and degrees of cultural independence. Results thus strongly support the antimicrobial hypothesis."