Why I love genetics 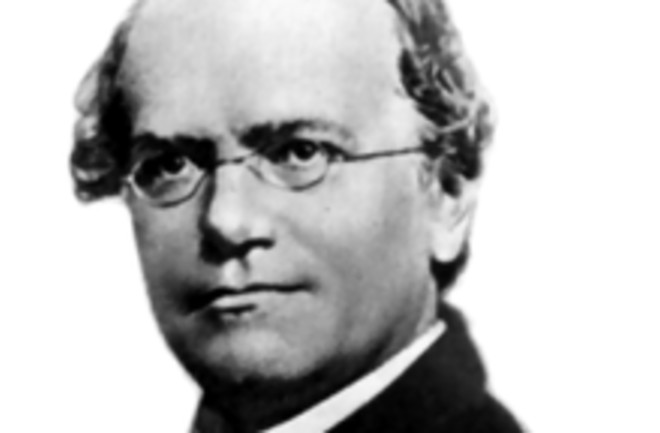 Gregor MendelA few years ago I had a discussion with a friend about our academic backgrounds. She is a neurobiologist by training, so I remarked in an offhand manner that I'd had an interest in neuroscience years ago. In fact, I admitted that I had even dabbled with the idea of pursuing graduate work in that discipline. More specifically cognitive neuroscience. Stanislas Dehaene's work, detailed in The Number Sense and Reading in the Brain, was of great fascination for me (cognitive and evolutionary psychology, of the sort outlined in Steven Pinker's The Language Instinct, has also been something of a personal obsession). I didn't go that route...I've been writing for 10+ years now, and long time readers can probably attest to the fact that I've become more and more focused on genetics as time goes by. This is due to the reality that I really like genetics. Really. The friend with whom I was having the conversation about our various interests admitted she couldn't even imagine an alternative universe version of me who would nerd out on neuroscience. That would be a bizarro-world Razib.

R. A. Fisher Genetics as an area of science appeals to me in large part because it is the basis for evolutionary process more generally. R. A. Fisher, the father of evolutionary genetics, who fused Mendelian inheritance theory and Darwinian gradualism, was a long time admirer of Charles Darwin (see R. A. Fisher: Life of a Scientist, for the gory details). His most influential work among biologists was therefore unsurprisingly titled The Genetical Theory of Natural Selection. Fisher took Darwin's verbal and descriptive model, and gave it a formal basis. One could argue that Fisher's project was too grand in scope and unrealistic in its ambition (I probably agree with this assessment at this point), but the field of population genetics which he, Sewall Wright, and J. B. S. Haldane, pioneered, has stood the test of time. Without population genetics evolutionary theory loses much of its intellectual muscle tone, becoming a descriptive skeleton. And the loss of vigor for evolutionary theory redounds to the detriment of natural history more generally. Genetics is the foundation for a grand edifice which aims to paint the tree of life.

Thomas Hunt Morgan But the flourishing of a formal theory of evolutionary process is ultimately rooted in the deep insight which is at the heart of Mendelian genetics: a discrete mode of inheritance. The Mendelism pioneered by William Bateson grew into a fully mature form in the laboratory of Thomas Hunt Morgan, and his "Fly Room." Morgan, and his colleagues and students, were not aware of the definitive concrete biophysical basis of genetic inheritance (i.e., they knew that genes where located in chromosomes, but were not sure of its biochemical basis), but they had correctly adduced its abstract nature, which is all that is needed for analysis. Gregor Mendel's supposition that there were discrete elements which mediated biological inheritance had the virtue of being correct. His laws of inheritance can actually be pinpointed to specific stages in meiosis, but the gory molecular details were not necessary for the broad analytic insights which came out of the Fly Room (e.g., Alfred Sturtevant's general understanding of the power of crossing over was not contingent upon knowing that in a physical sense this process occurs in the synaptonemal complex during prophase I of meoisis I).

Of course in 1953 Francis Crick and James Watson presented another model which happened to have the virtue of being correct, that of the structure of the DNA double helix, which had already been pinpointed as the likely substrate of genetic transmission over the previous decade. This resulted in the intellectual explosion that was molecular biology. And obviously knowing the biophysical basis of genetics was a necessary precondition for the technologically fueled revolution which has been genomics. A deep understanding of the nature of DNA has already given us great insight about the nature of evolutionary genetic processes. Can anyone imagine debates about the importance of cis-regulatory elements without a proper conceptualization of the physical characteristics of DNA?

Image credit: Konrad Förstner And yet despite the fact that modern genetics is difficult to imagine without the technology of high-throughput sequencing, or the lab tech on the bench preparing a PCR master-mix, genetics remains fundamentally a formal logical framework. You can have genetics without sequencing and molecular biology. This is obvious because that was exactly the case for decades. But you can't have genetics without thinking deeply and analyzing carefully the patterns of variation you see in the world around you. Obviously this is true of a discipline like neuroscience, but neuroscience is hard. In contrast, much of classical physics is "easier" than genetics.

Image credit: André KarwathBy this, I mean that analysis and model building only gets you so far in fields that have less robust theoretical scaffolds. In plainer language: I love genetics because I don't have to memorize tons of details because there's a model from which I can squeeze out insights on the spot. In line with the tale of Doug and Bill, I'm just lazy. But even a lazy man wants to know about the world. Ergo, genetics.