Why Flu Vaccines Don’t Work as Well in the Elderly 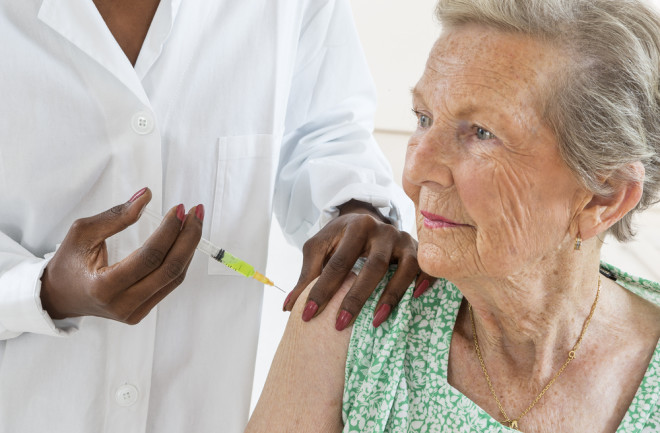 The flu vaccine isn't as effective in older populations. A new study has found B-cell changes as we age may be to blame. (Credit: JPC-PROD / Shutterstock.com)

The adage that “the older you are, the wiser you get” doesn’t always apply to our immune systems. Despite being exposed to a lifetime’s worth of illnesses, immune systems in the elderly are worse at fighting stealthy, shape-shifting viruses like the flu.

Why aging decreases our immune system’s abilities has been a mystery to researchers. But a new study published in Cell Host & Microbe finds that our infection-battling B-cells become blunted with age, making us less equipped to fight off the flu and other illnesses in our advanced years. And because most vaccines rely on a B-cell response to work, the finding may explain why the influenza vaccine is less effective in this population.

A research team compared how B-cells and antibodies from younger adults (ages 22 to 64) and elderly adults (ages 71 to 89) responded to vaccines for recent flu strains. The B-cells of younger people were good at recognizing mutations of the virus and producing protective antibodies. But the older people’s B-cells were less adept at fighting the rapidly changing influenza virus. Their B-cells were stagnant and the antibodies they produced were less diverse and less potent than the younger people’s.

“[Their B-cells] are ‘stuck in the past.’ The influenza viruses mutate and evolve with time, but with age, our B-cells can no longer keep up,” said senior study author Patrick Wilson, a researcher at the University of Chicago. “They don’t have quite the right tool to fight it.”

Our immune systems learn from exposure, and B-cells play a major role in the immunity process. With the help of other cells in the immune system, B-cells churn out antibodies when we get sick or receive an immunization. Antibodies are Y-shaped proteins that bind to harmful invaders and mark them for destruction. Once the infection is cleared, a type of record-keeping B-cell, known as memory B-cells, remain in the bloodstream and stand ready to produce antibodies if the threat is encountered again.

As we age, something hampers our immune system’s ability to produce ever-stronger antibodies in response to infections. As a result, older people are relying on mostly memory B-cells to make antibodies from long-past immune responses that are ill-equipped to squash rapidly evolving pathogens like the flu virus.

While new flu strains threw the elderly participant’s B-cells for a loop, they were very proficient at combatting mutations of the virus that circulated during their childhoods. Young people’s B-cells, however, struggled when faced with older strains of the flu.

Although each person’s timeline is different, the strength of our immune response diminishes over time once we hit a certain age. The researchers observed that participants between 50 and 70-years-old had intermediate declines in their influenza-fighting power, with steeper drops typical after age 70.

That’s why vaccines are so necessary for the elderly. But because the ever-changing flu virus is capable of outsmarting young and old immune systems alike, even a well-matched vaccine may only reduce the chances of illness by 40 to 60 percent in the general population. Effective rates are typically less for the elderly, but Wilson stressed that “not as effective” does not mean “not at all effective.”

“Vaccination still helps even if not as effective with age,” he said. “With vaccination, the duration and severity of illness will be reduced, which is extremely important for older people as the severity of infection is already much worse.”

As the research community toils toward a universal flu vaccine that would provide lifetime immunity, there have been advancements in the interim. New high-dose flu vaccines for older adults are now available and can unleash more protective antibodies.