Why culture is chunky and genes are creamy

My daughter has four grandparents. Genetically she is a little over 25 percent her paternal grandfather and maternal grandmother, and a little under 25 percent her maternal grandfather and paternal grandmother.* Why? Because she is 50 percent genetically identical by descent with her mother and likewise with her father. This is all rather straightforward. But what about culturally? With biological heredity we can speak of genes, the substrate by which inheritance occurs. With culture memes have been far less fruitful as anything more than an illustration, as opposed to the basis of a formal system of logic and analysis. Nevertheless, we can describe with relative clarity many aspects of culture as a trait or phenotype. And this is important. Recall that evolutionary process was characterized by Charles Darwin despite lacking a satisfying theory of inheritance. One of the more fascinating aspects of surveying human phenotypic variation is that one can consider the differing dynamics which those which are genetically controlled, at least in part, are subject to in contrast to those which are entirely "memetic" in character. Variation in skin color, for example, is mostly genetically controlled. In other words, skin color is a heritable trait in a genetic sense. In contrast the language one speaks is a function of milieu. One's hair form, blood type, and nose shape, are matters contingent upon one's biological parents in a necessary and determinative sense. Language, religion, and culinary preferences are accidents contingent upon one's parents' preferences. But it doesn't end here. In sexual organisms genetic inheritance is symmetric (the autosomal genome has equal contributions from both parents), and exclusively vertical (parents to offspring). In contrast cultural inheritance can be asymmetric (i.e., one inherits by and large the culture of one parent) and horizontal (one inherits the culture of one's peers). In The Nurture Assumption Judith Rich Harris relates the story of cultural continuity in elite British boarding schools. For generations norms and folkways were transmitted from older students to younger ones, with no parental input. This regular and systematic inter-quasi-generational horizontal transmission illustrates flexibility of cultural transmission which has few parallels in biological genetics. One reason that the logic of biological genetics is powerful is that the system is straight-jacketed by is own constraints, reducing the space of inferences and narrowing one's extrapolations. Often complexity breeds intractability (see: economics). This is why a formal and systematic study of cultural evolutionary process analogous to that in biology has been a quixotic quest (promoted periodically by individuals of note such as E. O. Wilson and L. L. Cavalli-Sforza, and pushed forward by Peter Richerson and Robert Boyd and their students for several decades). And yet all this is the broader purview of a paper in Proceedings of the Royal Society B. It is not online as of yet, so I will point you to the report in Nature, Genes mix faster than stories. Here is the top line result:

If folk tales simply spread by diffusion, like ink blots in paper, one would expect to see smooth gradients in these variations as a function of distance. Instead, researchers found that language differences between cultures create significant barriers to that diffusion. These barriers are stronger than those for the exchange of genes — a message that might be crudely expressed as: “I’ll sleep with you, but I prefer my stories to yours.”

The irony here is that despite the powerful flexibility of cultural transmission, quite often it is cultural variation which exhibits sharp inter-group differences. Both common sense and population genetic theory support this finding. Without inquiring further into the matter I will assert, and be willing to take a $100 bet, that the genetic distance between the Flemish and Walloons of Beligum is smaller than that between the Walloons and Catalans. The language of the Walloons is clearly more closely related to other Romance dialects than that of their Flemish neighbors (go to Google Translate and listen to various Germanic and Romance languages with the same phrase, and it is obvious). But it does not follow that this cultural resemblance must entail a genetic resemblance. As far as population genetics goes, gene flow is a very powerful force in equilibrating allele frequencies. Only 1 migrant per generation is needed between two populations to prevent them form diverging. Even a 1 percent admixture between two populations will quickly equilibrate allele frequency differences, especially considering that on most loci those differences are not of the disjoint character (frequency 0 vs. 1). Continuous gene flow defined by isolation by distance is a constant homogenizing force across adjacent populations. 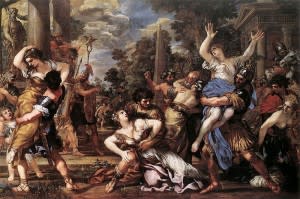 But the genetic homogenization on a genome-wide inter-population scale mediated by migration does necessarily hold for culture. It may in some cases, but by and large it does not. This is most easy to illustrate with language, and that is why I focus on that example. The case of the "rape of the Sabine women" by the early Romans is a legendary illustration of the distinction between cultural and genetic inheritance. The Romans assimilated many groups early in their history. In fact, the elite patrician gens Claudia even had paternal Sabine ancestry. But no matter the biological nature of their genealogy the Latin Roman cultural matrix persisted, and propagated. The children of the Sabine women were culturally Roman, not a hybrid between the Sabine and the Roman. One can illustrate this reality with other cultural characters. Modern Mexicans are a genetically hybrid population between Europeans and Amerindians. But their religion is a European sect (even if their Roman Catholicism has an indigenous flavor, no one would confuse it with the Aztec or Maya religion). Their language is also a European language (even if there are indigenous loan words, regional Mexican Spanish is intelligible with Castilian). But, their cuisine arguably has a predominantly Amerindian basis, albeit inflected with Iberian influences. The focus on regional, ethnic, and national constructs here is not coincidental. Cultural variation as noted above exhibits high levels of inter-group variation. When comparing the genes of the Yoruba and Tuscans, most of the variation is within each group. But when comparing the language of the Yoruba and Tuscans, most of the variation is across the two groups. The organismic analogy for groups or cohorts of individuals applies much more appropriately to cultural entities than it does to biological genetic abstractions (e.g., the Body of Christ). The origin of the term

illustrates the functional relevance of this reality of inter-group variation: even though culture is highly plastic across generations and populations, it is not always facultative in the lives of individuals. The way you speak marks your origins and your class. It constraints your norms, and shapes with whom you identify. And with that, back to my daughter. She will speak English, and she will be irreligious. Her norms and views will not be atypical for the average American. She will eat bacon (OK, she has), and when of age, drink beer. In all ways culturally that matter she resembles her maternal grandparents, and not her paternal grandparents. There was never a great question about this. In choosing to bring up their children to an American milieu my parents risked severing us from the culture in which they were embedded, and which nurtured them. So it is, and so it will always be. The dreams of generations past may die, but their genes live on. * Her whole recent pedigree has been genotyped, so these proportions are known with precision.