Who Has Dumber Fans, Ashton Kutcher or Justin Bieber? Math Reveals the Answer... 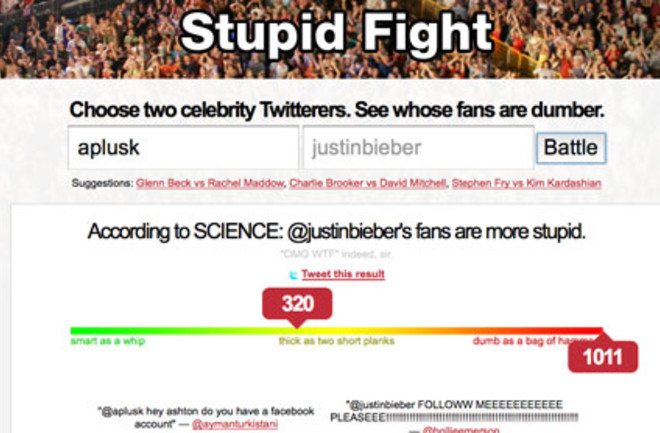 Since Twitter blew up into the mainstream last year, it's become rife with teenybopper types who join the microblogging service just to follow their favorite airheaded celebrities. Which raises the question: Which airheaded celebrity has the, uh, most unsophisticated teenybopper followers? Comedian and geek Tom Scott got his creative juices cranking to create Stupid Fight--a website that lets you compare whose Twitter followers are dumber. This is great, in case you've ever wondered what sort of a person would follow actor Ashton Kutcher or all-around diva Kim Kardashian and try to send them messages. Scott proclaims on his website:

FACT: A lot of people on Twitter are stupid. Many of these people follow celebrities and try to send them messages. But which celebrity's fans are most stupid? It's time to find out.

The idea itself is pretty simple. Scott explains:

Stupid Fight can't go out and administer an intelligence test to each person that's sending messages to a celebrity. So instead, it estimates based on several stupid indicators. Are they using twenty exclamation marks in a row? Do they endlessly use the abbreviation 'OMG'? Do they seem incapable of working out where their Shift key is? These indicators have a strong correlation with the message, and its sender, being stupid.

Just go to the site, plug in the names of two people you want to compare and bam! The indicator tells you whose followers are dumber. Of course, the caveat is that this is not a scientific process and Scott himself says, it's a lot like calculating your Body Mass Index: It works perfectly for some and not at all for a few others. So, when we plugged in Glenn Beck to compare his followers with Rachel Maddow's, here's what we found. Related Content: Discoblog:Introducing the Twettle: The Tea Kettle That Tweets Discoblog:The Best Way to Predict Box Office Hits: Twitter Chatter Discoblog: Your Plants Have More Twitter Followers Than You—Literally Discoblog: New Device Aims to Read Your Dog’s Mind—and Broadcast It on Twitter Discoblog: How To Make Your Twitter Followers Uneasy: Use ShadyURLsImage: Stupid Fight