Which population is most genetically distant from Africans? Amerindians 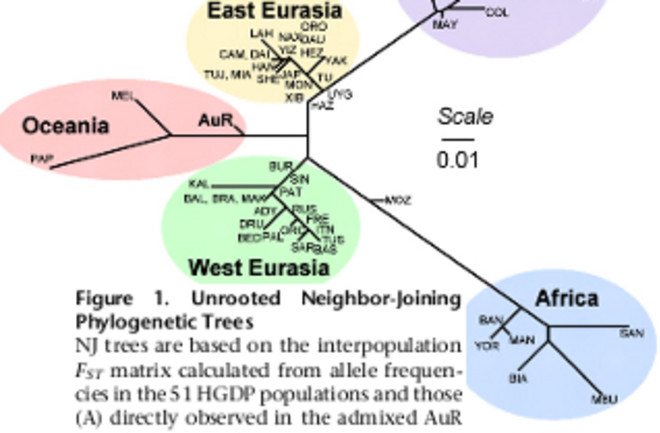 Yesterday I stated that it was wrong to think of any non-African population as more genetically distant from Africans. Well, I was wrong. Sort of. This is obviously a case where I had a model in mind, and went looking for visuals which reinforced the story I was going to tell. As noted in the comments of the previous page I should have double-checked Fst values. Fst basically measures the difference in gene frequencies between populations. Or more specifically, the proportion of the genetic variation which can be partitioned across two groups. It is the famous value, 0.15, which tells you that 15% of the variation in genes is between races, and 85% within races. It was actually not too easy to find Fst tables looking around in papers yesterday, but one reason is that more recently people have been abandoning matrix displays in tabular form for visual representations. It turns out there was just such a representation in my post on Australian Aboriginal genetics. The tree is scaled, so you can see the length of 0.01. The distance between termini indicates Fst magnitude. As you can see there are tight geographical clusters. Additionally, as noted in the previous post on Aboriginal genetics this particular representation in tree form is a touch misleading insofar as several of the populations are admixed. But, for the purposes of yesterday's post you see quite clearly that the distance between African's and Amerindians is the greatest in magnitude. Then East Eurasians/Oceanians, and finally West Eurasians. So what does this mean? And why is this so? I think I won't revise my model of the out of Africa migration. I don't think there was serious secondary migration out of Africa after the initial one (at least until recently). And yet somehow the indigenous populations of the New World are more genetically distinct. This is because of genetic drift. Specifically, a set of serial founder events, where the genetic variation was reduced and ancestral allele frequencies changed rapidly. When a population goes through a bottleneck, and then becomes isolated, it "goes its own way," as there isn't gene flow to requilibrate the frequencies. The push east, to Australasia and to the New World, was accompanied by founder events due to fissioning off of small groups from the main ancestral population. From what we can tell there was relatively little gene flow after the initial settlement of the New World and Oceania (actually, there may have been several waves into the New World to be fair, but it looks like there wasn't enough Eurasian gene flow to dampen the reduction in heterozygosity caused by bottlenecks). There are some cases in Europe and European descended populations of something similar happening. Iceland for example has been relatively isolated since its initial founding by people of Norwegian and Celtic origin. Combined with a small long term effective population size through several bottlenecks, what you see in Iceland are deviations from the ancestral gene frequencies due to the wild swings of random genetic drift. So Icelanders have the same common ancestors as other Europeans if you move far back enough in generations, but evolutionary parameters have reshaped their genetic character as a people to a greater extent than the other descendants of the common ancestors who remained in Europe. The main reason I would suggest I was "sort of" wrong is that I don't want people to misconstrue the higher Fst values of Amerindians with the idea that their African ancestors were different from the African ancestors of Eurasians or Oceanians. 50 to 100 thousand years ago presumably the common ancestors of all non-Africans were the same set of recent migrants. It just so happens that some of the subsequent descendants of the modern humans went on something of a wilder evolutionary ride than the others. Note: I put a little thought about what I should call the native inhabitants of the New World. Outside of the United States in the other New World nations I know that "Native American" isn't necessarily popular, but terms like "indigenous" and "Aboriginal" might confuse Americans. "American Indian" sounded like something from a Census form, and as a brown person I wasn't going to use the word "Indian." So I settled on Amerindian.