Where the wild clines aren't 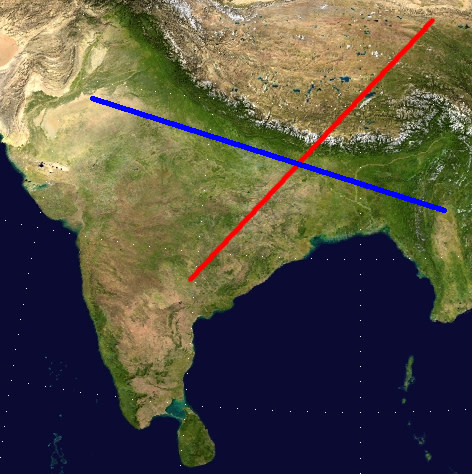 In the recent 'do human races' exist controversy Nick Matzke's post Continuous geographic structure is real, “discrete races” aren’t has become something of a touchstone (perhaps a post like Cosma Shalizi's on I.Q. and heritability).* In the post Matzke emphasized the idea of clines, roughly a continuous gradient of genetic change over space. Fair enough. But in the map above I traced two linear transects. I would suggest that anyone who has a general understanding of the demographics of South-Central Eurasia would immediately anticipate that these transects would reveal a relatively sharp break in allele frequencies. True, there are intermediate populations between the two end points, in Nepal, and on the fringes of India's northeastern states. But clearly about halfway through the southwest-northeast transect you'll see a rapid shift in allele frequencies. The blue transect is different, insofar as the change occurs very near its eastern pole. In Bengal, 85% of the length of the transect from its western terminus, the populations will still be far closer genetically to those on the western pole than those just to the east! I thought of this when I saw that Zack had posted a Tibetan data set from Qinghai. As the crow flies Qinghai is closer to the plains of North India than peninsular South India, but Zack found Tibetans from this region to be only ~1 percent South Asian. That's likely to be close to noise. I assume this does not surprise anyone. Despite the fact that North India is very populous in relation to Tibet, it turns out that geographical barriers are very strong in discouraging gene flow (note that Tibet and North India are actually culturally related; Tibetan Buddhism has its origins in the Tantric Buddhism of Bengal). This is one of my major "beefs" with the idea that "race does not exist" because of clines. I think this is a robust point when it comes to there being no Middle Eastern race vs. Scandinavian race. The clines are real and gradual between these two population sets. But I do think there has been strong differentiation between populations from the antipodes of Eurasia. I suspect that the emergence of more flexible lifestyles (e.g., oasis agriculture, horse nomadism) has in fact resulted in far greater connections between the isolated zones of Western and Eastern Eurasia over the past 10,000 years than before. In fact, one can conceptualize it as a two fold process. On the one hand you had very powerful expansions from small initial founder groups across macro-regions such as Western Eurasia and the Far East. This resulted in a decrease of genetic difference within these zones through the power of homogenization, though increased Fst in the few zones of direct contact across the zones. But, the "empty zones" of Central Eurasia may also have filled up with"proto-"Silk Road" centers over the past ~10,000 years, resulting in more frequent long term connections between the macro-regions than had heretofore been possible. * I guess I should divulge that I have socialized with Nick Matzke an that we share common friends.