When You Never Leave Your Car, It Can Be Your Doctor (and Doting Parent) 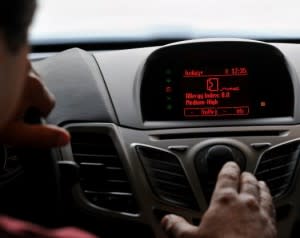 Those allergies are going to spike---better roll that window up.

Ford wants to make your car more like a phone. Or maybe like a self-contained living pod that you never have to leave. Some Fords already feature SYNC

, a system the company developed with Microsoft in 2007

that lets you control your phone or media player in your car using voice commands and buttons on the steering wheel. With SYNC, you can make hands-free phone calls, have your texts read aloud to you, and automatically call 911 when an air bag deploys in an accident. But the next generation of SYNC apps will be keeping tabs on your health—only logical, the company says, considering how much time we spend in cars and how much more we probably will in the future. In fact, they sound almost gleeful about the prospect: “People are spending so much time behind the wheel, and that’s expected to increase as we go forward, with increased traffic density and congestion,” a spokesperson said (via PopSci

). “(This is) about seeing the car as more than just a car.” The new suite of applications, which are not expected for at least a year or two, will track things like the blood glucose levels of diabetics, whose personal monitors would be linked in to the car, and the levels of pollen or smog nearby, in order to direct you to roll up your windows or help you plan a less smog-laden route. Some apps might even browbeat you if you’ve been bad, in a tone that sounds suspiciously like your mother (via PopSci

The car could ask questions to ensure that the driver’s blood sugar is not too low — such as, “did you eat breakfast yet today?” If the data suggests the driver is at risk of losing concentration or fainting due to low blood sugar, the car would recommend a snack, explained Dave Melcher, a Ford research engineer.

Notably, they won’t be checking blood alcohol levels or keeping potential drunk drivers from starting the car—they’re keeping the focus on “wellness,” a Ford spokesperson says, by which maybe they mean “liability.” And no word yet on whether there will be apps that help you cope with this future in which you never leave your car. Maybe a fine mist of antidepressants, or a sun lamp that shines on you hour after hour, as you sit parked in traffic, while an automated voice recommends a snack. Image credit: Ford (via PopSci