I was doing some exploring of the effect of a transition to agriculture on human height. Until the past few centuries humans were much shorter than they had been during the Ice Age. In the process I came upon some interesting data. Height, health, and development:

Adult height is determined by genetic potential and by net nutrition, the balance between food intake and the demands on it, including the demands of disease, most importantly during early childhood. Historians have made effective use of recorded heights to indicate living standards, in both health and income, for periods where there are few other data. Understanding the determinants of height is also important for understanding health; taller people earn more on average, do better on cognitive tests, and live longer. This paper investigates the environmental determinants of height across 43 developing countries. Unlike in rich countries, where adult height is well predicted by mortality in infancy, there is no consistent relationship across and within countries between adult height on the one hand and childhood mortality or living conditions on the other. In particular, adult African women are taller than is warranted by their low incomes and high childhood mortality, not to mention their mothers' educational level and reported nutrition. High childhood mortality in Africa is associated with taller adults, which suggests that mortality selection dominates scarring, the opposite of what is found in the rest of the world. The relationship between population heights and income is inconsistent and unreliable, as is the relationship between income and health more generally. 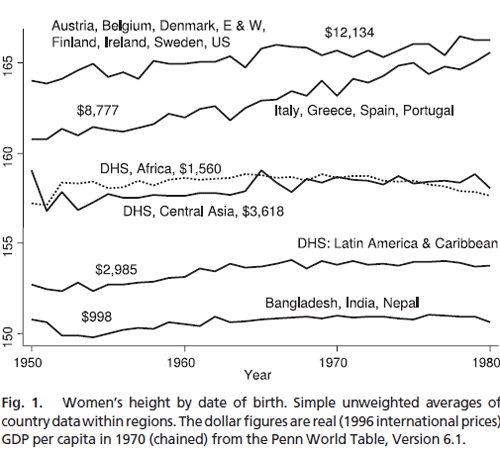 Some of this is not too surprising. As southern Europe has converged upon the incomes of northern Europe, so have their heights. Africa is the only region where average height may be dropping. This tracks Africa's economic stagnation and socio-political chaos since 1960. But figure 4 illustrates a relatively surprising relationship between income & wealth: 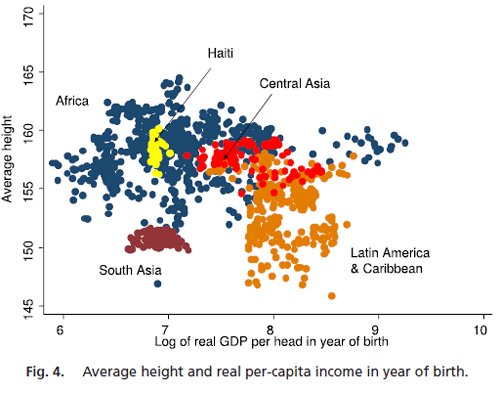 Across African countries there is basically no relationship between income and height. Haiti is broken out as a non-African country, but it is notable that it clusters with Africans, not other New World populations. South Asians are short and poor. In fact, they are far shorter than all the African data points which are poorer than they are. Perhaps income is only poorly tracking indices of social development? Here's the relationship between infant mortality and height: 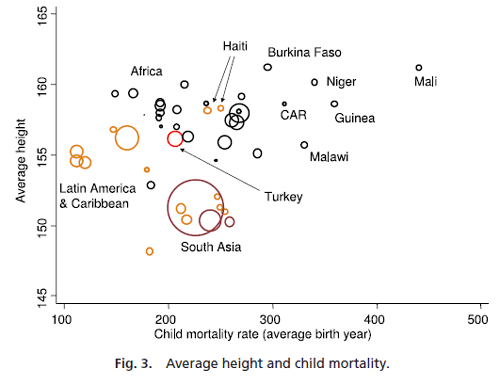 There's actually a positive relationship for African countries between height and infant mortality! I wouldn't make too much of this. Rather, it shows that the GDP as a predictor is telling us something real (more precisely, it is telling us that it is a weak predictor). Now, it still remains true that South Asia has the greatest number of very poor in the world, and nutritionally they are often inferior in their intake to Africans. But I found this paper from Trinidad & Tobago, Social inequalities and children's height in Trinidad and Tobago:

Trinidad and Tobago has a GDP PPP around $20,000. Finally, I want to point to a paper on India, Height, health, and inequality: the distribution of adult heights in India. Here's a table which is interesting: 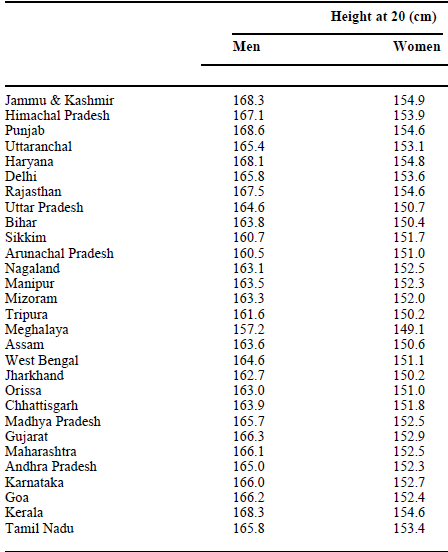 Some of the data here is not surprising. The states of the northwest show higher mean heights. But look at Kerala in the far south, it is nearly as tall as the states of the north! Kerala is of course relatively famous for having a combination of high gender equality and literacy, with relatively low incomes. Punjab in the northwest is among India's more wealthy states. So I decided to look at the relationships between social indices and height. I found anemia rates for women (page 12), and calculated an "anemia index," by multiplying out the proportion with severe (weighted = 3), moderate (weighted = 2) and mild (weighed = 1) anemia by state. Some states are not in the list, but in any case, here's the scatterpot with the R-squared: 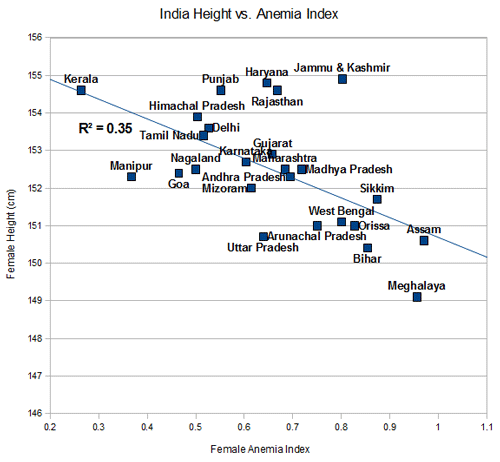 There's obviously a relationship between nutrition and height, but it's striking that the states of the northwest are off the trendline. Like African nations they seem to remain relatively tall despite progressively higher levels of anemia! Let's remove them out of the data set: 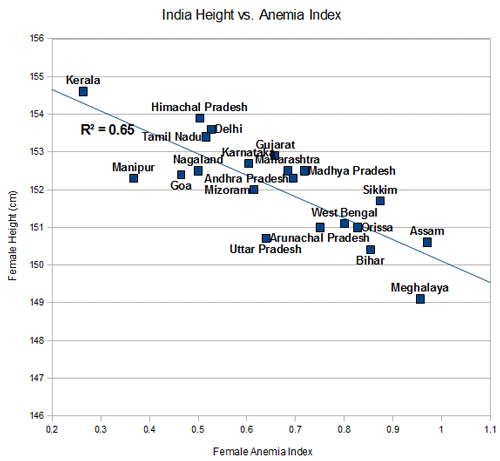 Wow. The R-squared went all the way up to 0.65! It is arguable that Kerala is about as genetically distant from the populations of northwest India as any excluding the Sino-Tibetan populations of the far northeast, so it seems that the height "gap" can be somewhat closed through development. That being said, it also seems plausible that there might be differences in diet (more milk, less cereal) and genetics which explain some of the differences in height across populations.