When It Comes to Nutrition, Do Doctors Practice What They Preach?

Discover's survey of MDs shows they pretty much do. 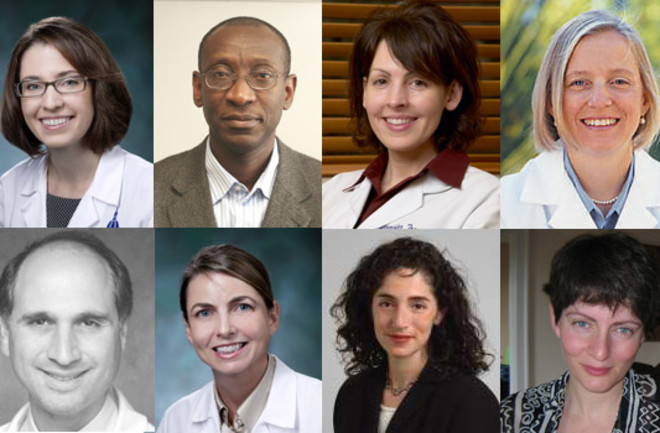 What she eats: Kue works long days, so she needs to eat enough fat and protein to keep from feeling hungry all day. When she cooks, she usually chooses lean pork and chicken as sources of protein; when it’s her husband’s turn at the stove, he generally opts for beef or fish. She tries to have a different meat with every meal, but she avoids cold cuts, she says, because they are loaded with nitrates and other preservatives.

Kue says she makes use of the FDA’s food pyramid guidelines when she chooses her meals. She does this by dividing her plate in sections—half the plate is for vegetables, a fourth for carbohydrates, and a fourth for meat. Recently, she has been trying to add more milk into her diet. “It’s a good source of calcium and protein,” she says. She tries to limit fast food meals to once a month.

The Doc: Rexford Ahima, Director of the Obesity Unit at the University of Pennsylvania Institute for Diabetes, Obesity and Metabolism

What he eats: Ahima maintains a daily intake that is less than 2,000 calories, although he says that most Americans clearly eat more than that. He does this by taking time to eat three distinct meals everyday and only occasionally snacking on fresh fruit between meals. His biggest meal of the day is lunch. Ahima starts with a side salad, then usually has vegetable soup, white meat like chicken or turkey, and heaps of steamed vegetables. He says his dinner is usually similar to his lunch, but he keeps the portions smaller.

The key to feeling full, he says, is to eat lots of green vegetables and fibers. The complex carbohydrates make you feel full, but don’t raise your blood glucose levels the way simple carbohydrates do. He also avoids eating out. He says that it’s clearly been shown that people who tend to cook their own meals gain less weight than those who eat at restaurants regularly.

What she eats: Tremmel has been a vegetarian for almost 20 years, and she chooses foods like nuts, beans, and low-fat milk as sources of protein, or occasionally eggs or tofu. She says that many Americans get about twice as much protein as they need. She also generally avoids unhealthy fats, such as those in butter and mayonnaise, opting instead for olive oil or canola oil.

Tremmel says that one key to maintaining her weight is to know what types of food are tempting and to not have them around. “I don’t keep sweets in the house,” she says, but she doesn’t completely restrict herself either—if she is intensely craving something, she will leave to go out and get it. By forcing herself to put in the extra effort, she says, she makes sure that she’s not just succumbing to temptation on a whim.

The Doc: April Stempien-Otero, Cardiologist at the University of Washington

What she eats: Stempien-Otero cooks meals with fresh, often organic and locally grown ingredients, and avoids processed foods. For dinner, she roasts chicken and vegetables, and uses the leftovers to make another meal, like tacos or risotto with vegetables. She tries to avoid processed foods with preservatives, such as granola bars or frozen pizza. “I don’t think our bodies can deal with all the things in those foods,” she says.“It’s not how we’ve evolved to eat.”

Salad is the last course of dinner, says Stempien-Otero. “That’s how they often eat salad in Europe,” she says, and although she’s not sure of the physical difference of having salad last, she says she feels that eating greens and roughage last may help to move food through the digestive tract. She also varies her fruits and vegetables with the seasons—she’ll have parsnips in the winter and carrots in the summer. Not only does this ensure a lot of variety in her diet, she says, it also is a more sustainable way to eat.

The Doc: John Alverdy, Director of Minimally Invasive and Bariatric Surgery at the University of Chicago Hospital

What he eats: Alverdy says he eats everything, and maintains his weight by being conscious of the number of calories he eats and the amount of moving he does. For instance, he usually eats a small lunch, such as half of a bagel and an apple. If a work meeting comes up and he eats a substantive lunch, he tries to make up for it with a smaller dinner and eats only meat and vegetables—no starch. He generally limits the foods that he says he knows will make him gain weight: bread, dessert, and alcohol. If he needs to lose a few pounds, he says, he’ll completely avoid those for about a week.

Alverdy says that there aren’t any foods that he completely restricts himself from having. Instead, he tries to balance his diet each day. He’ll enjoy a burger and fries for lunch, then have a small, healthy dinner. He also avoids going out for breakfast, even if he’s on vacation. Usually, he eats a bowl of cereal with fresh fruit instead.

What she eats: Fitzgerald says that she finds that having a regimented approach to a diet works well for her. For breakfast, she eats dry cereal and drinks orange juice on her way to work every day. Lunch is usually yogurt and an apple, along with some green tea. Dinner is the one meal that varies. By limiting the number of times she deviates from her routine, she finds it easier to maintain her weight.

When she’s making dinner for her kids, she decides first on a vegetable to serve, then adds a grain like pasta or bread. She also usually picks a vegetable or fruit that’s in season. Meat isn’t a big part of the Fitzgeralds’ dinner—they have it a couple of times a week, but not every night. She avoids eating fried foods and limits eating out. “Restaurants often use more fat and salt in their cooking,” she says, which makes the food tastier. Cooking at home allows you to know how much fat and salt is in the food, she says, and it can be healthier if the person doing the cooking is health conscious.

What she eats: Ricanati says she surrounds herselfwith healthy food to help avoid the problems of skipping meals (which leads tointense hunger and bad choices) and reaching for convenient foods (which areoften unhealthy). She keeps a bag of almonds in her car at all times, and hasyogurt drinks and granola bars on hand. She says that her eating has changed alot in the last few years, since she’s had children. She’s made a concertedeffort to switch from white grains to brown grains, add fresh fruits andvegetables to her diet, and avoid sugary juices.

To controlher portions, Ricanati says she usually serves dinner to her family on saladplates. This way, she eats eating smaller amounts of everything on the plate,and is more mindful when reaching for seconds. She also says, “I actually eat.If I eat breakfast, lunch, and dinner, than I’m not as hungry between meals.”Skipping meals can lead to overeating, she says.

The Doc: Nona Sotoodehnia, Cardiologist at the University of Washington

What she eats: For breakfast, Sotoodehnia has anegg or a piece of fruit; lunch is generally soup or a sandwich—almost alwayswith some vegetables. For dinner, she enjoys foods like pasta, steak, and morevegetables. Her cravings, she says, are generally for salty or meaty foods. “Idon’t have much of a taste for sugar,” she says, which makes it easier to avoidsweets. She says her low blood pressure may contribute to her disposition tocrave salty foods.

“I stickto eating foods with raw ingredients, things that I can identify,” she says. Itcan be nearly impossible to determine some of the ingredients in processedfoods or to tell where they’re from, she says. The hardest part about eatinghealthy she says, is her busy schedule. Still, she says she listens to her bodyand eats when she is hungry, and except for a piece of fruit in the afternoon,she avoids snacking between meals.