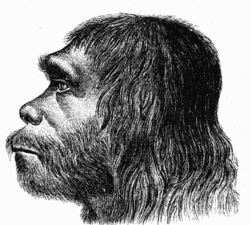 The excellent site io9 has a piece up today which is a fascinating indicator of the nature of popular science publications as a lagging indicator. It is a re-post of a piece published last April, How Mitochondrial Eve connected all humanity and rewrote human evolution. In it you have an encapsulation of a particular period in our understanding of human natural history through evolutionary genetics. Notice for example the focus on maternally transmitted lineages, mtDNA and Y chromosomes. And the citations on genealogy date to the middle aughts. The science is mostly correct as far as it goes in the details (or at least it is defensible, last I checked there was still debate as to the validity of the molecular clocks used for Y chromosomal lineages),

. The distance between 2011 and 2009 is far greater in this sense than between 2009 and 1999 (or even 2009 and 1989!). The io9 piece is a reflection of the era before the paradigmatic rupture. We are no longer talking just about African mtDNA Eve and her husband Y chromosomal Adam. I'm going to consciously avoid the term "revolutionize," because the broad outlines of the old story certainly hold. Rather, as we are wont to do it seems that we became a bit too bold with some of our brush strokes, and elided fascinating and subtle elements of the landscape on the margins. There were Crebs, and other assorted Oogas and Boogas. And the painting is not completed yet. As such we can't really draw any conclusions as to "what it all means," aside from the fact that it's fascinating. Addendum: Someone in the comments observes in relation to a depiction of Eve in the story that "She's awfully pale for an East African." This is true on the merits, but the logic is kind of dumb. Why exactly do we think that people ~150,000 years ago looked anything like modern East Africans? It is very likely that Europeans ~35,000 years ago did not look like Daryl Hannah.