When Did Sex Become Fun? 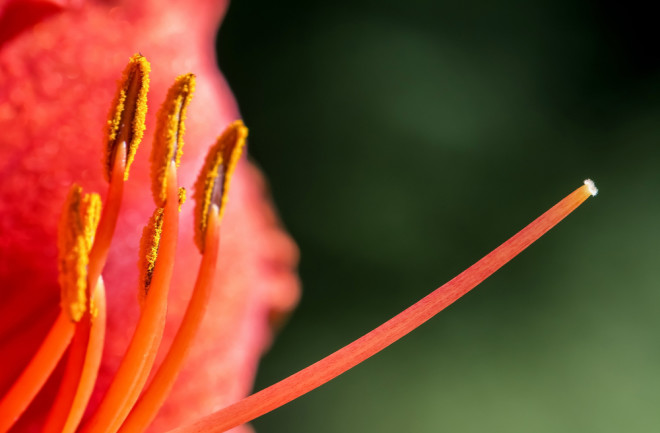 The reproductive organs of a lily. (Bryan Neuswanger/Shutterstock)

There are multiple answers to the question of where we come from: early hominins, monkeys, primordial goo, or the Big Bang, to name a few. Today’s answer, though, has probably, just a split second ago, popped into many readers’ minds. Today’s answer is sexual intercourse, a.k.a. “bleeping.” So let’s go back to the beginning, hundreds of millions of years before we invented euphemisms and censorship, and let’s ask: How in the evolutionary world did sex begin? Algae, the green gunk that runs amok in our fish tanks, as well as the seaweed that stinks up our summer beaches, include some of the simplest sexually reproducing organisms on Earth. These lineages go back nearly 2 billion years. Algae do it. Plants do it. Insects do it. Even fungi do it. Much of this sex involves releasing sperm into the wind or the water so they can be carried to nearby eggs (as in mosses), relying on a different species to carry male gametes to female ones (many flowers), or maneuvering two bodies so that the openings to the internal reproductive organs are close enough together for fluid exchange (most insects and most birds).

Earth is brimming with organisms that sexually reproduce—even stinkhorn fungi do it. (Ed Ogle/Flickr)

But after the origins of sex, it took another 1.5 billion years for sexual intercourse—as we vertebrates know it—to come about. I’m talking about the kind of reproductive sex that humans and other mammals, as well as some birds, reptiles, amphibians, and fish, have—with an external male penetrating organ and an internal female reception area. In other words, I’m talking about bleeping. With internal fertilization, unlike with moss sex and flower sex, weather and middlemen are irrelevant (but they can still play a role—for humans anyway). The seemingly more dependable but deceptively complex process of internal fertilization is nearly 400 million years old among vertebrates.

We can track vertebrate internal fertilization back into deep time thanks to some rocks from an Australian desert. In 2008, paleontologists discovered the fossilized remains of a fish embryo still connected to its mother through the umbilical cord, dating to some 380 million years ago. This particular mother, inspiration for a new species name, Materpiscis (mother-fish), is not alone. Many more fossil fish embryos were discovered in museums once the rocks were re-examined in this light. Previously, scientists had assumed the little animals inside the big ones were dinner, still being digested.

Fossilized fish embryos are the earliest evidence for both internal fertilization and live birth in vertebrates. (Museum Victoria/Wikimedia Commons)

I got the impression from reading about all this business in paleontologist John Long’s The Dawn of the Deed (Long was on the team that worked on Materpiscis) that the exciting discovery of a pregnant female was, above all, the inspiration to find “the world’s oldest vertebrate willy.” And find a fossilized member is precisely what Long and his colleagues did!

(Despite the element of luck that’s involved in paleontology, this is not the only notable success to result from such a specific goal. Dutch anatomist Eugene Dubois’ search for “the missing link” at the end of the 19th century is another great example of someone setting out to find specific fossil evidence previously unknown to science and then actually finding it. Dubois’ missing link is what we now know as Homo erectus: the butt of so many human evolution–themed “oldest willy” jokes.)

For Long, his quest and subsequent discovery wasn’t just about the origins of any run-of-the-mill sexual biology; his was the hunt for the dawn of pleasurable sex, of sex “for fun.” (Now we’re talking about that thing we Homo sapiens like to think is the exclusive domain of—you guessed it—humans!) But how could a fossil fish penis be evidence for pleasurable sex? Can a fish have fun? It’s not easy to know. But it’s also not that important, because I think we can safely assume that something about copulation must be rewarding to the individuals doing it—or else they wouldn’t risk sustaining an injury by socializing so intimately.

But actually, as long as it enables successful reproduction, copulation only needs to be rewarding for one of the mating pair—on condition that one partner is able to manipulate its mate into copulating. Maybe this reward system arose early in the evolution of internal fertilization (like even before penetrating genitalia evolved). Maybe not. Fossils are usually silent on the topics of pleasure and fun. However, what we can ask them is: Which of their fossil parts go where and what do they do?

Pelvic fins found on fossil fish (not unlike those on the living coelacanth above) are arguably evidence of the first “true intromittent organ” in vertebrates—that is, one that inserts into another organism during sexual intercourse. (Alberto Fernandez Fernandez/Wikimedia Commons)

Pelvic fins on some ancient fossil fish resemble mating claspers on living fish, which gave Long and his colleagues a good idea of what to look for in the rocks. (Some “claspers” are appendages that are inserted in but also clasp the female—hence the name.) And they used this expectation to identify fossil claspers that they argued to be perhaps the earliest “true intromittent organ”—an organ that inserts into another organism during sexual intercourse—in an ancient fish, also from about 380 million years ago, called Incisoscutum. (In 2014, an even older fossil fish with an external male organ was announced. Microbrachius dicki [yes, really] pushed internal fertilization in vertebrates back to 385 million years ago.For more information, check out this story by journalist Brian Switek and this one, which has a sex tape!)

The organ that Long’s team found on Incisoscutum is a “protopenis”—in part because, unlike the penises we’re accustomed to, the proto one faces backward, away from the head of the male fish. This backward protopenis begged the paleontologists to imagine what acrobatics were required to take care of business. Long describes an “inverted 69 position, with the female on her back on the soft seabed floor whilst the male pushed the slightly erected clasper backwards into her cloacal opening” (my italics because … seriously?).

this baby-making as we know it? Anthropologically speaking it isn’t, not really. Throughout recent history and around the world, most heterosexual human bleeping takes place in the so-called “missionary position”—a man-on-top formation that researchers Peter Gray and Justin Garcia, in their book Evolution and Human Sexual Behavior, discuss as having little to do with missionaries, because, for example, some peoples who have never met missionaries report this as the most common position.

And no matter which partner is on top, face-to-face positions occur much more frequently than otherwise in acts of human copulation (according to the discussion and drawings in biologist Alan Dixson’s Sexual Selection and the Origins of Human Mating Systems). So although we are an objectively and exceptionally adventurous species when it comes to sex and seeking its pleasures, we also have our typical behaviors—like all species do. And our typical procreative positions do not include an “inverted 69.”

Now, what about pleasure? In human terms, could Long’s model of ancient fish sex be the dawn of sex for fun? Sure. Why not? Well, at least for the male. In order for us to be more confident about the female, our ancient fishes would need to have (magically) evolved dexterous fingers—which didn’t actually evolve on Earth until many millions of years after these protopenises. As explained in a recent article in the Journal of Experimental Zoology called “The Evolutionary Origin of Female Orgasm”: “human female orgasm during sexual intercourse is uncommon, in particular without additional clitoral stimulation; the orgasm is in fact more common during female masturbation or homosexual intercourse, than during actual heterosexual intercourse.”

So it’s the manual work, not the manhood’s, that’s topping off the pleasure in the female half of the species. I’ve never heard a paleontologist, most of whom are men, describe an ancient fossil finger as evidence for the dawn of pleasurable sex. Why do you suppose that is?