What's worse than a leech in your ear? NOTHING! 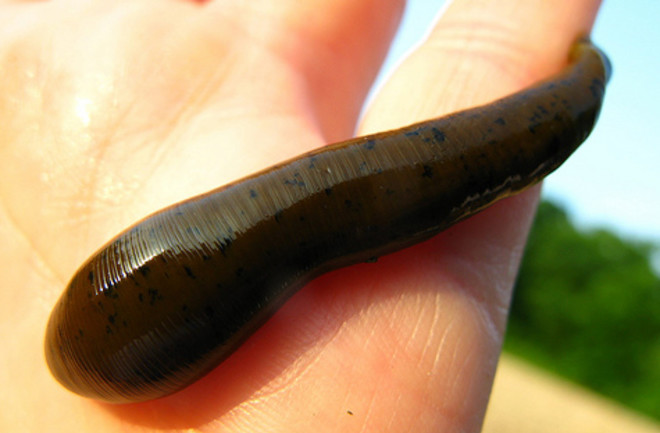 There was a time when we thought that "intra-nasal leeches" were the grossest thing in the world. But that was before we read this paper, which describes a medical case disturbingly similar to a scene from Star Trek II: The Wrath of Khan. If you are squeamish, we recommend that you read no further.

Otorrhagia bleeding due to leech bite. "Leeches are blood-sucking hermaphroditic parasites that attach to vertebrate hosts, bite through the skin, and suck out blood. When leeches feed, they secrete an anticoagulant (hirudin), which helps them get a full meal of blood. This is the first report of leech removal from external auditory canal. Previous leech involvement cases were explained in nasopharynx, larynx, pharynx, eye, and gastrointestinal tract. Prominent sign of all cases was active bleeding from the leech attachment site; that stopped with leech removal. A 24-year-old man was presented to Al-Zahra hospital with left otorrhagia and otalgia from 2 days ago. After suction of ear a small soft foreign body was seen in the external ear near the tympanic membrane, then the ear filled with glycerine phenice, the patient explained decreased movement of foreign body. Four hours later the bloody discharge stopped and otalgia decreased. After suction of clots, a leech was extruded from external auditory canal by alligator. Leech infestation is a rare cause of otorrhagia and should be suspected in the endemic region in all of unusual bleeding; it can be diagnosed and treated by exact inspection and removal." Related content: NCBI ROFL: Nasal leech infestation: report of seven leeches and literature review. NCBI ROFL: Superglue in the ear double feature: pros and cons. NCBI ROFL: "Here's egg in your eye": a prospective study of blunt ocular trauma resulting from thrown eggs.