What to eat to avoid garlic breath. 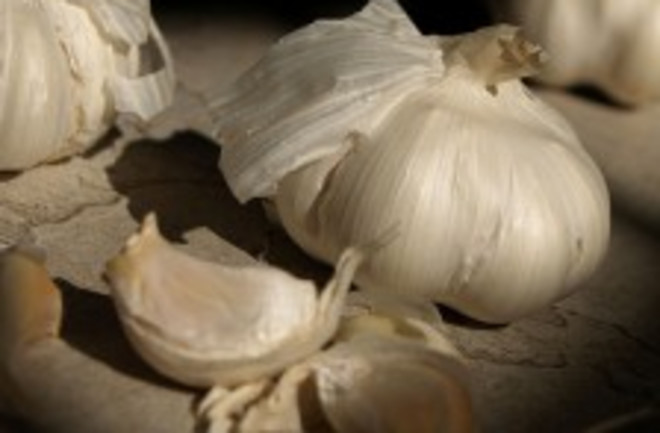 Photo: flickr/Sebastian MaryGarlic! So delicious, yet so stinky. If only there were foods you could eat after garlic to quench the stench. Well, according to this study, there are. These scientists first developed an automated method for detecting garlic odors, and then used this to "smell" the breath of participants after eating garlic followed by a variety of foods. The result? Turns out that eating parsley, spinach, mint, raw and microwaved apple, soft drink, green tea, and lemon juice all helped. Hmm... sounds like I should order a limoncello for dessert the next time I go out for Italian. Troppo male!Deodorization of Garlic Breath Volatiles by Food and Food Components. "The ability of foods and beverages to reduce allyl methyl disulfide, diallyl disulfide, allyl mercaptan, and allyl methyl sulfide on human breath after consumption of raw garlic was examined. The treatments were consumed immediately following raw garlic consumption for breath measurements, or were blended with garlic prior to headspace measurements. Measurements were done using a selected ion flow tube-mass spectrometer. Chlorophyllin treatment demonstrated no deodorization in comparison to the control. Successful treatments may be due to enzymatic, polyphenolic, or acid deodorization. Enzymatic deodorization involved oxidation of polyphenolic compounds by enzymes, with the oxidized polyphenols causing deodorization. This was the probable mechanism in raw apple, parsley, spinach, and mint treatments. Polyphenolic deodorization involved deodorization by polyphenolic compounds without enzymatic activity. This probably occurred for microwaved apple, green tea, and lemon juice treatments. When pH is below 3.6, the enzyme alliinase is inactivated, which causes a reduction in volatile formation. This was demonstrated in pH-adjusted headspace measurements. However, the mechanism for volatile reduction on human breath (after volatile formation) is unclear, and may have occurred in soft drink and lemon juice breath treatments. Whey protein was not an effective garlic breath deodorant and had no enzymatic activity, polyphenolic compounds, or acidity. Headspace concentrations did not correlate well to breath treatments." Related content: NCBI ROFL: Garlic: a sensory pleasure or a social nuisance? NCBI ROFL: Effect of milk on the deodorization of malodorous breath after garlic ingestion. NCBI ROFL: Does garlic protect against vampires? An experimental study.