What makes chocolate so deliciously melty in your mouth? 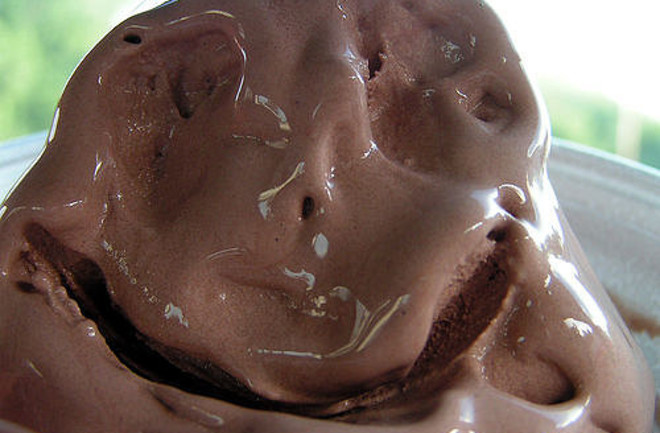 Image: Flickr/JackieMmmmm.... chocolate! It's not just the flavor that makes is so delicious, it's also the rich texture in your mouth. But what factors lead to that smooth film that coats your mouth when you eat chocolate? If you think it's simply melted cocoa butter, think again! According to this study, properties of both the chocolate and your saliva contribute to the "lubrication" of the chocolate as you chew it. These scientists measured the physical properties of molten chocolate mixed with either saliva or salty water (PBS) as well as "chocolate expectorated after chewing till the point of swallow" (yum!). They report that the cocoa butter, sugar particles, and saliva also play a role in developing the texture of chewed chocolate. We just hope the poor souls who were asked to spit out chocolate before swallowing were well compensated!Lubrication of chocolate during oral processing. "The structure of chocolate is drastically transformed during oral processing from a composite solid to an oil/water fluid emulsion. Using two commercial dark chocolates varying in cocoa solids content, this study develops a method to identify the factors that govern lubrication in molten chocolate and saliva's contribution to lubrication following oral processing. In addition to chocolate and its individual components, simulated boluses (molten chocolate and phosphate buffered saline), in vitro boluses (molten chocolate and whole human saliva) and ex vivo boluses (chocolate expectorated after chewing till the point of swallow) were tested. The results reveal that the lubrication of molten chocolate is strongly influenced by the presence of solid sugar particles and cocoa solids. The entrainment of particles into the contact zone between the interacting surfaces reduces friction such that the maximum friction coefficient measured for chocolate boluses is much lower than those for single-phase Newtonian fluids. The addition of whole human saliva or a substitute aqueous phase (PBS) to molten chocolate dissolves sugar and decreases the viscosity of molten chocolate so that thinner films are achieved. However, saliva is more lubricating than PBS, which results in lower friction coefficients for chocolate-saliva mixtures when compared to chocolate-PBS mixtures. A comparison of ex vivo and in vitro boluses also suggests that the quantity of saliva added and uniformity of mixing during oral processing affect bolus structure, which leads to differences in measured friction. It is hypothesized that inhomogeneous mixing in the mouth introduces large air bubbles and regions of non-emulsified fat into the ex vivo boluses, which enhance wetting and lubrication." Related content: Who needs sunscreen when you have chocolate?The case of the chocolate candy dental fracture.Want to make someone more generous? Feed them this.