What makes a sexy wasp sexy? Funny you should ask... 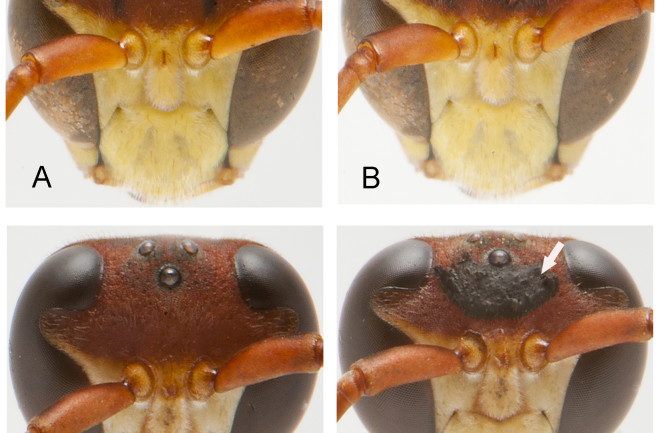 FIGURE 2: Experimental paint manipulation of males' black pigmentation on the head.Males were manipulated to have low (A, before; B, after manipulation) or high black pigmentation (C, before; D, after manipulation). The arrows indicate the manipulated area. If you've ever wondered what lady wasps (the insects, not the acronyms) want in a man, look no further. These scientists set out to determine which physical features of male wasps - black spots on the head, yellow spots on the abdomen, and body size - are most preferred by females. To test this, the researchers painted the wasps to either cover up or exaggerate their coloration. They found that the female wasps preferred to mate with males with a higher proportion of black facial pigmentation (panel D vs. C in the figure to the left) and bigger yellow abdominal spots, suggesting that these traits are sexually selected. And that wasp in panel B? Ugh, what a toad.Sexy Faces in a Male Paper Wasp "Sexually selected signals are common in many animals, though little reported in social insects. We investigated the occurrence of male visual signals mediating the dominance relationships among males and female choice of sexual partner in the paper wasp Polistes simillimus. Males have three conspicuous, variable and sexually dimorphic traits: black pigmentation on the head, a pair of yellow abdominal spots and body size differences. By conducting behavioral assays, we found that none of the three visual traits are associated with male-male dominance relationship. However, males with higher proportion of black facial pigmentation and bigger yellow abdominal spots are more likely chosen as sexual partners. Also, after experimentally manipulating the proportion of black pigment on males' face, we found that females may evaluate male facial coloration during the choice of a sexual partner. Thus, the black pigmentation on P. simillimus male's head appears to play a role as a sexually selected visual signal. We suggest that sexual selection is a common force in Polistes and we highlight the importance of this group as a model for the study of visual communication in insects." Related content: NCBI ROFL: Think all wasps look alike? Then clearly you're not a wasp.NCBI ROFL: Think all cows look alike? Then clearly you're not a cow.NCBI ROFL: What does bed bug sex smell like?